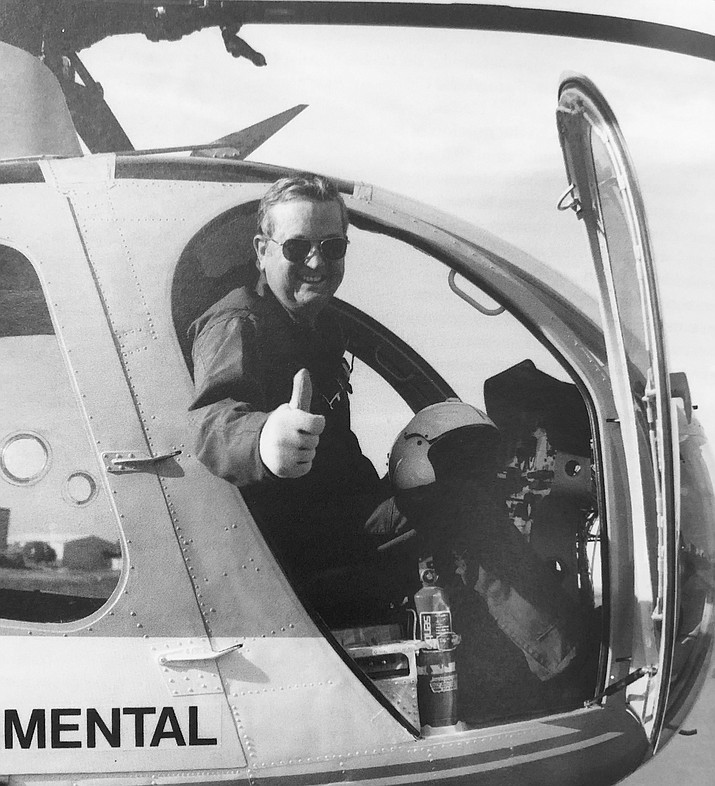 WILLIAMS, Ariz. — “There’s no reason for someone to survive a crash — and then die in a fire.”

Beginning from his experiences in his youth and interest in aviation, Robertson translated his curiosity with aircraft into a career as a pilot for the U.S. Air Force, Arizona Army Guard and Air National Guard. However, he will forever be remembered as the “Father of Crashworthy Fuel Systems.” 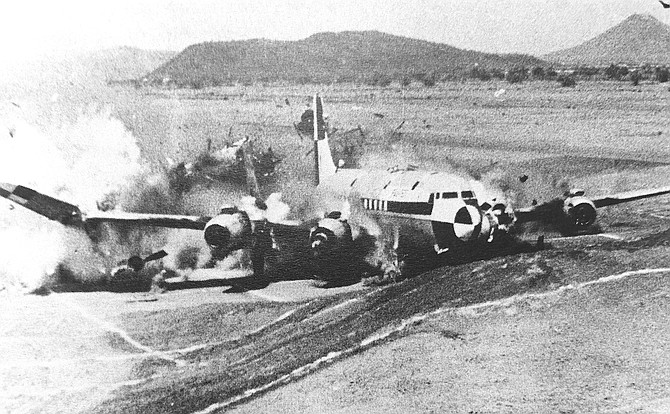 After leaving the Air Force in 1960, Robertson was finally able to pursue his dream of creating a crashworthy fuel system when he began work for Aviation Crash Injury Research (AvCIR), a division of the Flight Safety Foundation.

“I got a call that said that if I came and worked there, they would help me and the military will fund it,” Robertson said. “I went back the next day and said if you will let me do my own research with a couple of guys and not put me in the chain of command, I’ll do it.”

He became part of a movement to change the perception that research should solely focus keeping airplanes from crashing into one that focused on how to make crashes survivable.

Robertson joined a team of researchers who began crashing airplanes and helicopters to see how their data compared to actual accidents and analyzed what happened to occupants during a crash to evaluate better systems.

The team had to determine not only how to analyze the crash, but also had to figure out how to crash the aircraft itself.

Although AvCIR, which later became Aviation Safety Engineering and Research (AvSER), was focused on how occupants were injured or killed in air crashes, Robertson’s research focused on injury and death in post-crash fires. Crash impacts killed more people in airplane crashes, but post-crash fires caused the most injury and death in survivable crashes. 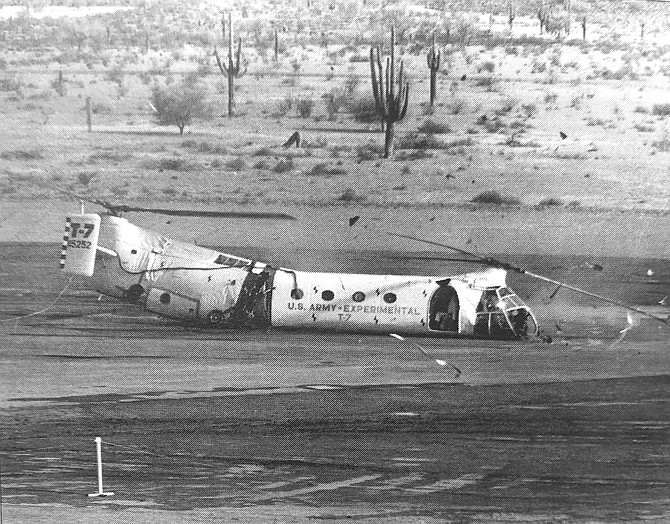 Experimental crash at the moment of impact; the helicopter is still crushing downward as its blades start contacting the ground. The test crash was filmed by high-speed cameras on 16-millimeter film at Deer Valley Airport in 1964. (photo/Harry Robertson)

Robertson’s research became an important part of AvSER and cameras onboard the crashed aircraft showed the team how failures in the fuel systems created hazard-ous spillage.

Research found occupants had only 90 seconds to escape a burning airplane and 17 in a helicopter. Just a small amount of fuel, even seven gallons, could cause a full explosion of a helicopter.

As researchers looked at modifying fuel mixtures, Robertson forged ahead with his idea to contain the fuel better. His team focused on developing fuel containment that would withstand any crash that a human being would survive.

The idea Robertson began with was a tank that would be a cut resistant flexible bladder within a rigid cavity. The bladder needed to withstand coming apart when the fuel slammed into the tank during a crash, as well as being tear and puncture proof. The tank also needed to be light and located where it wouldn’t block exits or trap occupants.

By 1963, Robertson’s crash tests were successful in providing a tough-wall tank concept that worked.

Although research has surpassed what was originally done with AvSER, the research done during that time is still relied upon today. Robertson said the breakthrough came from getting people to accept the idea that people can survive a crash that is just beyond luck.

Robertson and his coworkers went on to author the first engineering manual on aircraft crashworthiness called the US Army Aircraft Crash Survival Design Guide. The guide was used by many organizations to specify crashworthiness requirements for new aircraft.

In early 1968, Robertson was satisfied with the development of a crashworthy fuel system he and his team had developed. That same year, Robertson was summoned to the Pentagon, where the system was brought before several generals who watched a slide and movie presentation of the helicopter crash testing.

The U.S. Army also was concerned over helicopter deaths and loss of aircraft during the 1960s and specifically the Vietnam War.

General Harold K. Johnson addressed Robertson and asked if he could put the team’s knowledge to work.

By 1970, helicopters with crashworthy fuel systems began arriving in Vietnam. The last two years of the war gave Robertson the results he hoped for. The group had predicted a 72 percent reduction of post-crash fires in survivable accidents, but actually reached 75 percent.

U.S. Army helicopter crew fatalities were eventually reduced by 99 percent once Robertson’s designs were installed. Shortly afterward, all military branches incorporated his systems. Today, Robertson’s technology reaches as far as Afghanistan and Iraq, where helicopters with his designs are flown by American soldiers and aviators in combat on a daily basis.

Always desiring to be his own boss and now armed with a resume of experience, Robertson left Aviation Safety and Engineering Research in 1970 and took the next step of forming his own company, Robertson Research that was based at Arizona State University. As a research professor, he co-founded the International Center for Safety Education and created the Crash Survival Investigators School. 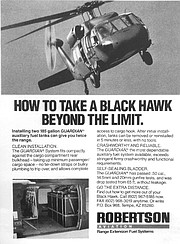 Around that time, Robertson also began to realize his system could be beneficial to auto racing safety too. Robertson, who was an avid racing enthusiast, was watching the 1973 Indianapolis 500 when David “Salt” Walther’s car crashed and sprayed fuel throughout the grandstand. Many spectators were burned and Walter was seriously injured.

Robertson got in touch with race officials who were under pressure from insurance companies and worked with USAC from 1975 until 1998 writing specs for bladders, fillers, caps, hoses and fittings for the cars. His contribution helped lead to a significant reduction in post-crash fires in race cars. Robertson received several awards including the Continental Casualty Company Safety Award at the Racing Hall of Fame museum at the Indianapolis Motor Speedway. 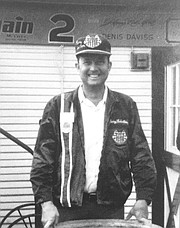 Harry Robertson smiles after his final inspection of the Indy-car fuel systems at Indianapolis Motor Speedway May 31, 1976. (Harry Robertson/photo)

Robertson went on to begin work with Embry-Riddle Aeronautical University in Prescott.

He founded the Robertson Safety Institute (RSI), a center for research and development in safety education. RSI continues today by giving industry leaders the ability to stay on the cutting edge of research and practice in aviation and industry safety.

Three buildings on the Prescott campus are named after the inductee – the David L. and S. Harry Robertson Flight Simulation Center and the Robertson Aviation Safety Center I and II. The safety center complex includes an aircraft accident investigation laboratory with recreated accident scenarios and equipment for disassembling, inspecting, and evaluating aircraft components.

The ISASI-Robertson Fellowship supports research in crash-worthiness, survivability, and accident investigation by providing a graduate student an opportunity to conduct novel research on aviation safety design and technology while working with the Robertson Safety Institute within the Department of Safety Sciences.

Robertson continues to be a trustee of Embry-Riddle, and funds student scholarships and contributes to expansion projects on the Prescott and Daytona Beach, Fla. campuses. 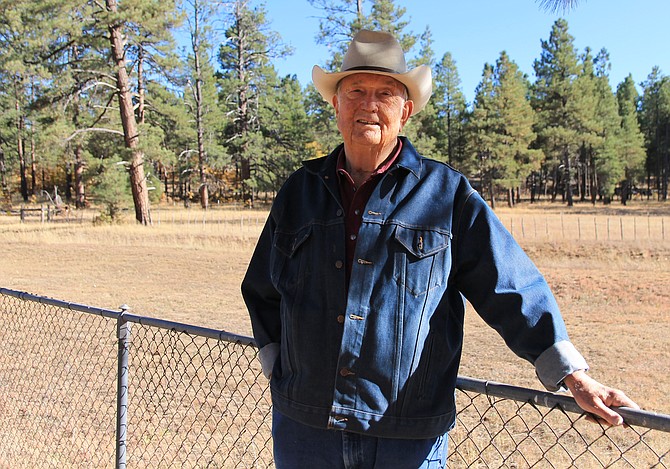 “At the last few commencement addresses I’ve given, I’ve paused at the end and remind the students to look around at what other people have done,” he said. “It came from the minds of those with engineering knowledge that they have passed on. So I’ve been trying now for the last half of my life to mentor people to help them.”

Robertson said his favorite thing now is the time he spends at Pine Springs Ranch in Williams where he tends cattle with a caretaker, and enjoys the quiet.

“At one point we had 700 head,” Robertson said. “I used to fly my helicopter there every day, flying the fences.”

Although he is now 85, Robertson said he continues to have ideas about aircraft safety, but said it is now time for others to continue the work.

“A lot of people put me down when I started my research, they said you’re crazy,” Robertson said. “But I tell those graduates now to take your thoughts and try them out and see how they work.”

More information about Robertson can be found in “Crash and Learn, The Harry Robertson Story” by Kathleen Gilbert.