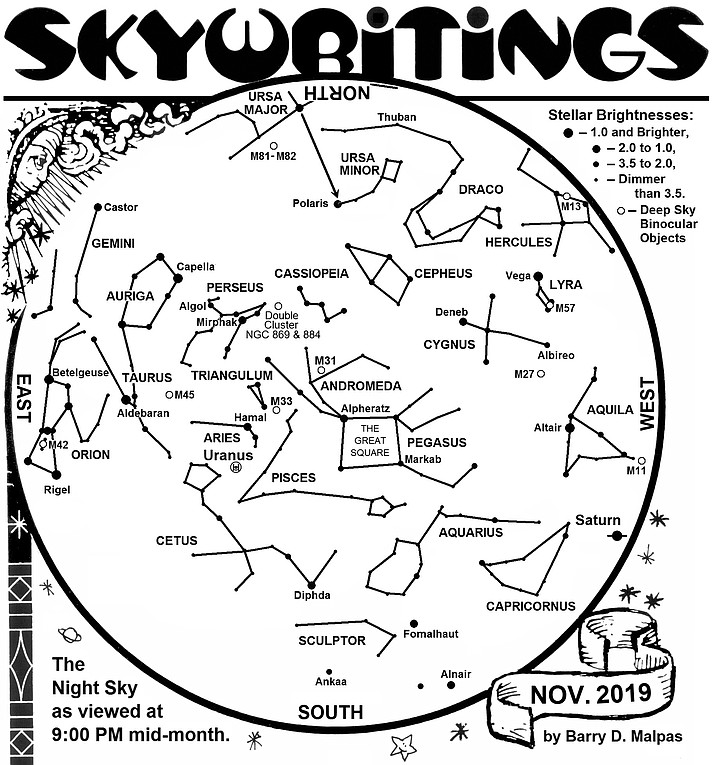 Mercury is only 0.38 the size of Earth and one of only two planets nearer to the Sun than us, the other being Venus, and therefore is never seen in the evening sky.

It is viewed as either an evening “star,” setting shortly after the Sun, or as a morning “star” preceding sunrise. Despite the fact that people have been observing Mercury since antiquity and with telescopes for centuries, what have we learned about this small, strange planet?

Mercury orbits the Sun every 88 days and has the most elliptical (oval shaped) orbit of any of the eight planets. As such, it shifts in its velocity around the Sun more measurably than any other planet. From Earth’s perspective, Mercury’s orbital ovalness makes it sometimes only visible at 18 degrees out from the Sun when it reaches the edge of its orbit. At other times it can reach out to 27 degrees. This geometry allows for the best views more easily from the southern hemisphere.

Mercury has no atmosphere, no moons, and despite its small size and slow 58.6-day-long rotation, it has a global magnetic field of about 1 pecent of the strength of Earth’s. Its crust and mantle are composed of silicates, and its core is composed of nickel-iron. In fact, Mercury is twice as iron-rich as any other planet and has an average density greater than all the other planets except Earth. Because of its proximity to the Sun, Mercury during daytime is 800 degrees Fahrenheit, while temperatures on its night side are a frigid -280 degrees Fahrenheit.

Mercury has a heavily cratered surface — Kuiper, the largest crater, is 60 kilometers across. Another curiosity is one of its two largest impact features, the enormous Caloris Basin. At the spot on Mercury’s other side precisely opposite this basin is the so-called Weird Terrain: a hilly region that is unlike anything else on the planet. Apparently, in the ancient past, shock waves from the colossal meteor impact that formed Caloris Basin traveled around the planet’s surface and collided at the opposite side to create this unique feature.

Solar radiation and micrometeorite impacts are two major forces that have shaped and continue to influence Mercury. Although Earth and Mars each tilt at about 25 degrees as they spin, Mercury alone rotates straight up and down, without even 1/10 of a degree variance from perfectly vertical. This means that at its poles, half the solar disk is always below the horizon and the planet experiences no seasons. There are places at the poles where sunlight never touches. For example, some craters on Mercury never see the Sun at all, resulting in permanent darkness, and some are filled with ice. Even though Mercury is the closest planet to the Sun, it could be a future resource for water.

Because of perturbations caused by the Sun and Jupiter, Mercury’s orbit changes greatly in shape, going from circular to more than twice as elliptical as it is presently. With an elongated orbit, Mercury could eventually approach and even collide with Venus sometime in the next five billion years. Every century, the perihelion (Mercury’s orbital point nearest the Sun in its elliptical orbit) advances by about 1/6th of a degree. Although most of this precessional shift can be explained by applying Newton’s Laws of Gravity with respect to the pull on Mercury by other planets in the Solar System, a discrepancy between observation and calculation became apparent in the late 1800s. However, in 1916, Albert Einstein’s General Theory of Relativity was applied to the problem, resolving the difference. We now understand that this additional precession is actually because of the effects of general relativity, as the Sun’s mass deforms space-time around it.

In the 1960s, radar showed that Mercury actually rotates on its axis in 58.6 days. This means that three of its rotations — three Mercury days (58.6 x 3) — happen in the same interval as two of its years (88 x 2). This 3:2 resonance between day and year means we see the same face of Mercury every second time it orbits the Sun.

Because Mercury’s orbit falls within Earth’s, it passes directly between us and the Sun about 13 times a century, when its small disk can be observed against the Sun. These transits only occur during the months of November and May because of the geometry of the orbits of Mercury and Earth. The most recent transits have, or will, occur in 2016, 2019 and 2032.