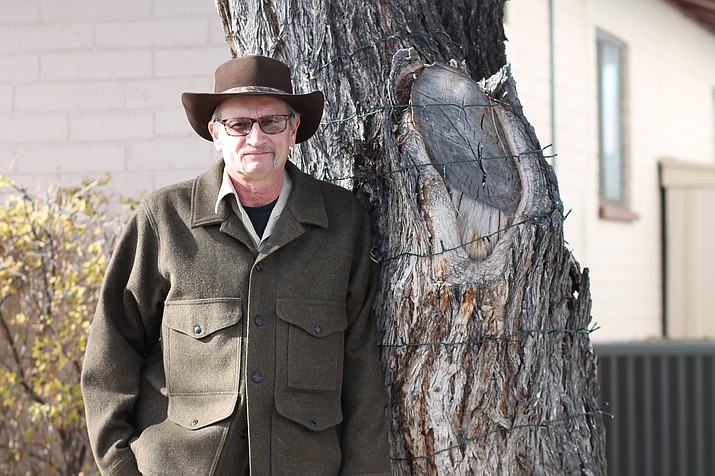 WILLIAMS, Ariz. — Like many others who came of age during the Vietnam War era, Dauenhauer joined the military straight out of high school.

“I turned 18 in January and didn’t really know what I wanted to do,” he said. “I didn’t tell my parents for two months. It was kind of a rebellious thing.”

Dauenhauer said his father, who grew up during the Great Depression, joined the military and fought during World War II. Back then, he explained, it was ‘America, right or wrong.’

More than two decades later, when Dauenhauer himself signed up, it wasn’t so black and white.

“I was in a time when the military wasn’t really appreciated, right after Vietnam,” he said. “People didn’t really talk about the military. In San Diego, which was a huge military town, we went off base and were refused a motel room three times.”

Dauenhauer said he didn’t go into the military for accolades, but for more practical reasons at the time: he didn’t know what he wanted to do with his life yet. He wanted to go to college and couldn’t afford to do so without the benefits of the G.I. Bill.

While in the U.S. Navy, Dauenhauer was deployed twice aboard the U.S.S. John Paul Jones to Southeast Asia. The second time was during the Iranian Hostage Crisis, during which 52 American hostages were held for over a year as members of the Muslim Student Followers of the Imam's Line, which supported the Iranian Revolution, took over the U.S. Embassy in Tehran.

Because of the secrecy surrounding both the situation itself and the aborted rescue attempt, Dauenhauer said most of the American public knew before he did — he was at sea in the Indian Ocean and was on a need-to-know basis, and it was determined at the time that he and his crewmates didn’t need to know.

That kind of secrecy set the stage for Dauenhauer’s exit from the military, and the bitter taste he held for it for many years.

While he was at sea, Dauenhauer’s father passed away. He didn’t find out until three days later, and after getting tangled up in red tape regarding his flight home, didn’t make it home for another four days. By that time, he had missed the funeral. To make matters worse, his godfather had passed away the day of his father’s funeral, and was being buried the same day Dauenhauer returned home.

That was in March, and Dauenhauer was scheduled to leave the military in June. He applied for a hardship discharge since his remaining time was short, but it was denied. Because of all the negative circumstances at the end of his deployment, Dauenhauer admitted he wasn’t very pro-military after he left.

“I eventually got over that because I realized that they weren’t at fault for my father passing or my godfather, I was just upset by the way they handled it,” he said. “It didn’t leave a very good taste in my mouth.”

Part of the negativity stemmed from feeling he was robbed of really getting to know his father, because they had just begun evolving their relationship from that of father-child to one of man-to-man. It was something he had been looking forward too, since his father’s staunch German background wasn’t necessarily one of sharing feelings.

After leaving the military behind in the 1980s, Dauenhauer said his attitude towards it has changed to one of appreciation. Sometimes, he said, he tears up at the sight of the American flag. Other times, not so much.

Working for the Forest Service wasn’t necessarily Dauenhauer’s dream job from the beginning. A friend who worked for the Forest Service at the time mentioned the idea to him after he had left the military and was attending college. It was good pay and veterans receive preference over non-veterans with the same qualifications.

“This was back in the affirmative action era, so I knew it would be easier for me to follow her, as opposed to her following me,” he said. “So I got a degree in elementary education and taught for 11 years while continuing to work for the Forest Service seasonally.”

After he and his wife divorced, Dauenhauer continued working seasonally and found a permanent job with the agency in 2005.

“When I was teaching, being in the woods was like a vacation for me,” he said. “The more I’ve worked, I’ve found that this career with the Forest Service feeds an inner something for me.”

Dauenhauer says he’s not just doing the work he does to benefit himself and his co-workers, but for future generations as well.

“I tell people my job is not just a benefit to the people I’m working with, but it’s really for their grandkids’ grandkids,” he said. “The things we’re doing now aren’t just benefitting us. People may not enjoy or understand what we’re doing right now, but it’s for the future. What we’re doing on Bill Williams (Mountain) right now — it’s benefitting us, but we’re really doing it for future generations.”

Dauenhauer plans to stay with the Forest Service in Williams, in part because he’s emotionally invested in the Four Forest Restoration Initiative (4FRI) and wants to see it completed.