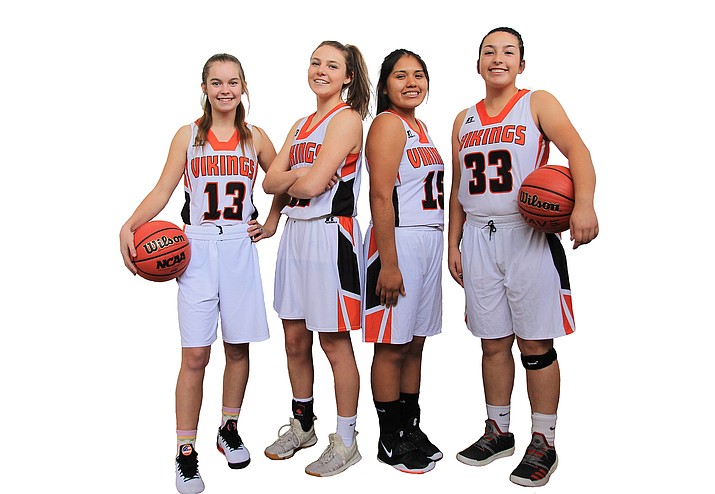 WILLIAMS, Ariz. — With four seniors leading a talented Vikings roster this season, they have so far shown they are ready for a challenge.

The Lady Vikes already went up against Northland Prep Academy Nov. 26, where they handily beat the Spartans 52-22.

The Vikings then took on the Rock Point Cougars Nov. 27. The Vikings lost 69-48 but showed good form against a team that went 21-4 last year.

“I believe Rock Point is one of the stronger teams in the state against this year,” said Head Coach Phillip Echeverria “It’s good to play them early to see where you’re at and what you need to work on.”

The Lady Vikings went 14-14 in 2018, and lost Amaryssa Orozco and Paola Belmontes to graduation.

Echeverria is looking to seniors Madi Olson, Maegan Ford, Jazlyn Romero and Mikayla Sanders to lead the team this year.

“We lost some seniors that were part of this building process,” Echeverria said. “But we’ve been playing some summer ball which has also helped with things.”

Echeverria said the team has five juniors and quite a few freshman and sophomores to round out the teams this year.

“It’s nice to see the numbers of kids go up that want to play basketball,” he said.

Although the girls played some summer ball, Echeverria said there is some work to get ready for the season.

“The girls are in great shape from playing other sports, but we have a ways to go to get that basketball sense back,” he said.

Echeverria said he is happy about where the girls are now and hopes to build on each game. He said his guard play is important for the motion offense.

“Our guards need to be able to handle the ball well and attack the basket,” he said. “I think we have some quality shooters from the outside, but we struggle creating open shots for ourselves from the outside.”

He said the team’s strength is quickness and agility.

“I have eight to nine girls that are close in ability so they can step in and give minutes,” he said. “We have three or four girls that can score when needed.”

He said his goal is to peak at the end of the season and felt the girls may have peaked too early last year.

“When we got into the playoffs we weren’t playing our best basketball,” he said.

Echeverria said the teams in the 1A Central region to beat are Mogollon and Grand Canyon.