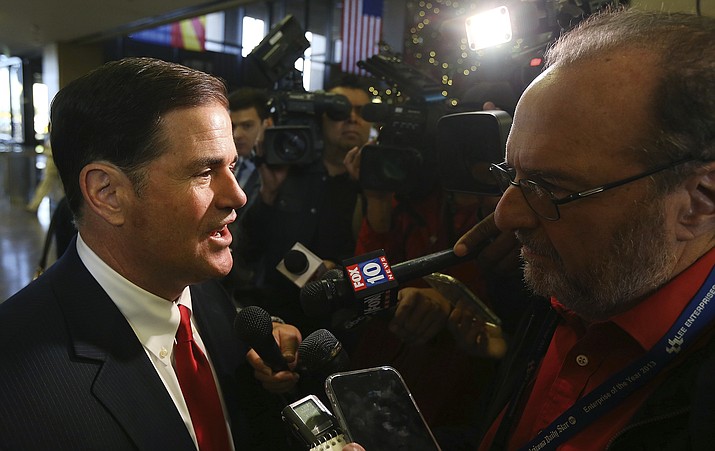 Arizona Gov. Doug Ducey speaks to reporters regarding the search for the missing child swept away in flood waters of the Tonto Creek after Ducey attended the Capitol Christmas Tree Lighting Ceremony at the Arizona Capitol Tuesday, Dec. 3, 2019, in Phoenix. (AP Photo/Ross D. Franklin)

PHOENIX (AP) — Arizona Gov. Doug Ducey said Dec. 3 he will work to find money in next year's state budget to help build a bridge over a rural creek where a family was swept away last week.

Two children were found dead after Friday's incident on Tonto Creek and a search is ongoing for a missing 6-year-old girl.

Gila County has applied repeatedly for federal funds to pay for a bridge over the crossing where the family truck was swept away while trying to traverse the swollen creek, but hasn't won a grant for the project, according to county spokeswoman Jacque Sanders. About 1,000 people are cut off when the creek floods during heavy rains.

The governor told reporters that with the state in a good financial position, looking at ways to fund a $20 million bridge to serve the small community is in the mix. The county has sought $17 million in federal funds and would pay for the remainder.

"We're going to look at the infrastructure needs of the state and I've heard the asks on this bridge," Ducey said. "It certainly is going to be considered in this budget season."

Gila County Sheriff's Lt. Virgil Dodd said Tuesday that about 60 law enforcement search and rescue team members were searching for 6-year-old Willa Rawlings. More than 300 civilian volunteers also were involved in the search of about 5 miles of creek bed.

"There's still a slight chance that this little girl could have hiked up the river or something," he said. "That's why I want to keep it open for now."

The couple whose truck was swept down the runoff-swollen creek, Daniel and Lacey Rawlings, told azfamily.com on Monday they are grateful to emergency personnel and volunteers searching for their daughter. The bodies of the couple's 5-year-old son and a 5-year-old niece were found Saturday, a day after a nine-member family group tried to a cross a creek in a military-style truck.

The couple didn't want to discuss what happened Friday or why they tried the cross the creek with their four children and three nieces.

"I will say one thing," Daniel Rawlings said. "People go around the barricades all the time. I'm not justifying my actions one bit."

The crossing had been closed with barricades and signs because of a storm that dropped an estimated 2 inches (5 centimeters) of rain in the Tonto Basin area.

Ducey said people need to pay attention when roads are flooded, or creeks are running high.

"When we do have inclement weather, if people will heed the warnings from the authorities we'll have a much better situation," he said.

The county's federal grant application says five people had died crossing the creek in the past 25 years. That was before last Friday's tragedy.