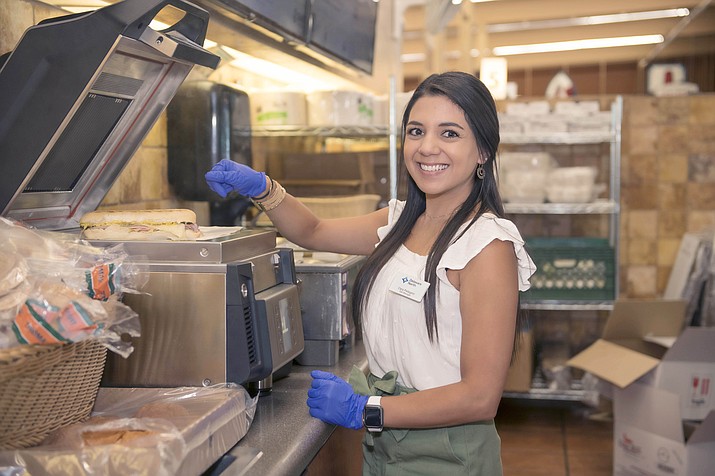 “We just purchased a Panini Press Sandwich Maker, it’s an incredible machine with delicious and fast results,” Pelligrini said. “We’ll be changing some of our sandwiches into panini’s and adding a few new items such as a caprice.”

Vegetarian and gluten-free options will also be available.

Born in Paraquay, South America but raised in Tarrytown, New York since she was five months, Pelligrini, 26, obtained her degree in Food and Beverage Management from Johnson and Wales University in Rhode Island.

“I found a passion for hospitality after working at a few hotels in my home town. I came to the Grand Canyon about seven months ago and started as supervisor for Yavapai Restaurant. I love my work and love living here,” she said.

She was promoted to Deli Manager at Canyon Village Market two months ago.

Along with implementing Panini’s, Pellegrini also re-designed the look of the deli’s Grab N’ Go sandwiches, a popular selling item at the General Store.

“We use biodegradable and compostable products for packaging and now include condiments,” she said.

“We like going to the deli because it’s easy to get lunch or dinner,” said Kimble Talley, who works for the National Park Service (NPS). “I typically go on Friday’s to get my kids pizza —they (Canyon Village Market) give locals a discount, which is really nice.”

The staff at the deli ranges from five people during the day and four for the evening shift.

Pelligrini said she enjoys implementing new items and being conscious of making the best use of the employee’s time.

“The new Panini Sandwich maker will help cut down on our food preparation time and move lines faster,” she said. “Right now we only have one oven which we use for pizza’s our number one seller.”