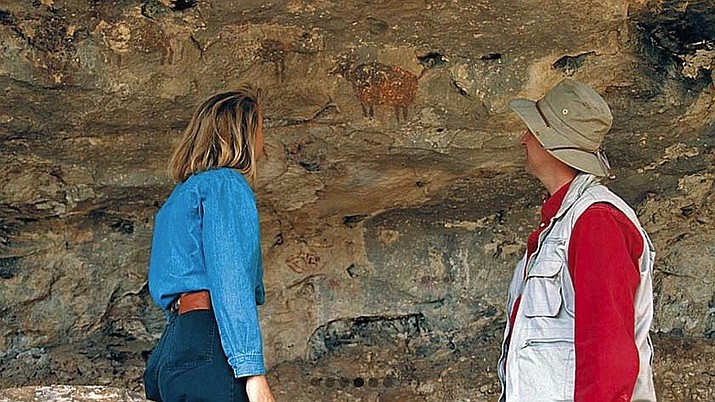 John Tatham has been leading tours to an Indian painting site outside of Tusyan since 1995. Tatham was recently awarded the Public Archaeology Award for the state of Arizona. (Photo courtesy of Grand Canyon Jeep Tours)

GRAND CANYON, Ariz. — John Tatham has been hiking and exploring the Arizona wilderness for decades, but it was his discovery and subsequent stewardship of a Native American antiquity site on the Kaibab National Forest that led to his recent recognition by Gov. Doug Ducey’s Archaeology Advisory Commission.

Tatham, who owns and operates Grand Canyon Jeep Tours and Safari in Tusayan, Arizona, was the only for-profit business to receive the Public Archaeology Award, which recognizes individuals and programs that are dedicated to preservation and protection of Arizona’s archaeological resources.

According to Tatham, he heard about a Native American archaeological site near Tusayan that had paintings and etchings on a rock overhang, but the locals wouldn’t tell him where they were located. Tatham said he then went to the Forest Service, which also declined to tell him where the site was located, instead inviting him to find them for himself.

“I spent weeks hiking the area, hiking by the train tracks, hiking all over trying to find it,” he said. “Then one day, I found them. It was like I had discovered them for the first time.”

“It’s one of the only sites in the area where there are petroglyphs (etchings) superimposed over the earlier pictographs,” he said.

In 1995, Tatham applied to the U.S. Forest Service to take a tour to the site. After obtaining permission from the Forest Service and local tribes, Tatham then walked the site with Forest Service archaeologists to learn about what it represents so he could accurately tell the story to his guests.

Tatham said the site was likely used as a short-term campsite on one of the many trade routes between the Havasupai and Hopi tribes that passed through the area. Archaeologists speculate that Havasupai hunters may have come up from Indian Gardens, located inside the Grand Canyon, to hunt in the area.

“There’s not much evidence of long-term living,” Tatham said. “It was probably a site they used to camp along the trade route.”

Tatham has been a steward of the site for more than 20 years, working to protect and preserve the ancient paintings as well as educating newcomers about its history and significance. An Arizona native, Tatham said he has always been interested in the history of the Native American people in the region, who they are and when they arrived. Along with the tours he leads to the rim of the Canyon, Tatham thought the stop at the ancient site would be something a little different for visitors to experience.

“This award is saying it was a good decision by the Forest Service all those years ago,” Tatham said. “The site has been so well protected for all these years.”