Taking the lead: A Peruvian shepherd builds a new life in the pastures of Williams 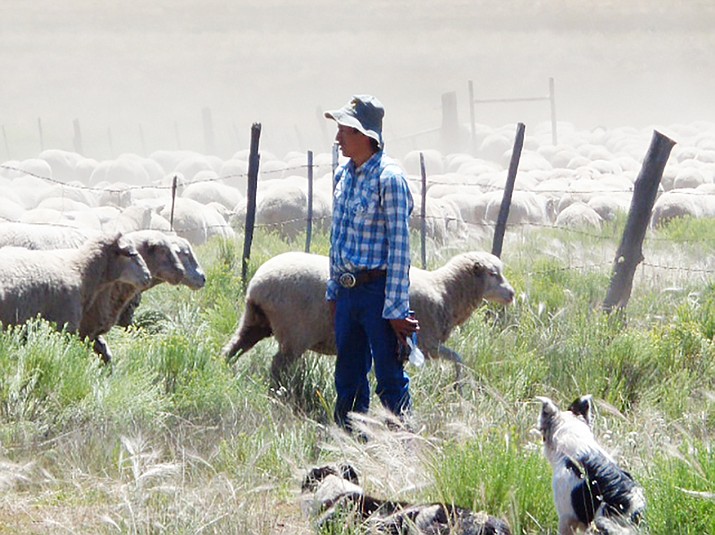 Juan Rojas Meza was born in Huancayo, the capital of the Junin Region in the central highlands of Peru in 1991. He has worked in the U.S. since 2013. (B. Garibay/WGCN)

In the lingering stillness of dawn, the faint jingle of a cowbell reverberates through the pines as a wave of meandering sheep ascends across the parched landscape. With their heads pointed to the ground, they selfishly mow every blade of wild grass that lays before them.

Trailing this wooly ocean of livestock is the distant silhouette of a solitary man. His pace is slow and methodical and his traveling gaze knows no rest. For five isolated months, he’ll parent the flock of 1,750 sheep through the hills and meadows south of Williams.

Juan Rojas Meza watches a herd of of more than 1,750 sheep south of Williams from early June through October.The sheep, owned by Joe Auza of Casa Grande, Arizona are moved from Williams to winter pastures where they are then sheared.(B. Garibay/WGCN

Meza is kept company by two Australian Shepherd dogs, 6-year-old Patas and 9-month-old Churro. Three other Great Pyrenees dogs are the primary guardians of the flock. (B. Garibay/WGCN

Juan Rojas Meza was born into poverty in Huancayo, the capital of the Junin Region in the central highlands of Peru in 1991. The mountainous city is well known for its remarkable feats in historic architecture and has a population of around 456,000, although opportunities to erect a life from the soil beneath scarcely present themselves.

Meza is one of 11 children (all boys) who sacrificed his youth in order to provide for his family. As a child, he attended school until 1 p.m. — the remainder of the day was utilized for taking care of the basic necessities around the household.

“I was only able to go to school for nine years,” Meza said. “When I was 13 years old, I left school and found work on a ranch outside of the city. When I worked on the ranch, they taught me how to herd sheep, plant potatoes and grow other vegetables.”

Meza worked there until he was 16 after which he sought out work in Lima, the capital of Peru. As a 16-year-old boy with minimal skills and education, few jobs were available. After a stint making clothes at a textile plant, he found himself in the fields of a coffee plantation.

“When I was 17 years old I started picking coffee beans in the coffee fields,” he said. “I stayed there until I was 19.”

For the next three years Meza compiled a list of jobs, but always returned to the open pastures to hone his skills as a “borregueros” or sheepherder as he is referred to in the U.S.

In 2013, Meza received a call from a cousin in Wyoming — his cousin held the key to a new life as a borreguero in the United States

Meza swiftly filed his H-2A, a temporary agricultural visa that allows men like Meza to work in the country for three years. After three years, the visa expires, at which time they return to home for a three month break. Meza then traveled, by bus, through Mexico and boarded a flight to Wyoming.

In 2016, after tending sheep in Wyoming and Utah and a brief three-month layover in Peru, Meza corralled a position as a shepherd working for Joe Auza out of Casa Grande, Arizona.

For generations now, Auza hauls a portion of his sheep to the flourishing meadows south of Williams in the early days of June.

Juan Meza shepherds more than 1,700 sheep south of Williams from early June through October. (B. Garibay/WGCN)

One luxury in Peruvian shepherd Juan Meza's life is electricity garnered through a single solar panel connected to a car battery. (B. Garibay/WGCN)

As the colors of spring begin to reveal themselves, the now 28-year-old Meza guides the flock through the northern prairies for his third year. His temporary home is located at Sevier Flat, just west of Dogtown Lake. It’s there that the foreman decided would be the best place to centrally locate Meza and his rickety trailer or “campito” as he refers to it.

The campito that is Meza’s shelter offers little more than a dry place to lay his head. He has no running water, toilet, shower or refrigerator and the only source of electricity is an aging solar panel connected to a car battery by an electrical cord. The panel provides Meza with just enough juice to partially charge his phone, turn on one straining overhead light and keep a shoebox of a cooler cool. His cupboards are speckled with a limited variety of canned goods, rice, beans, bread and peanut butter, while his mini icebox contains a few slices of cheese, an Orange Crush, some mystery meat and two cervezas that were given to him through a mutual friend.

“My boss takes me into town once a month on pay day to cash my check and buy more food,” Meza said. “It’s the only time I go into town.”

A propane stove is his one luxury. He accepts these conditions for what they are; for it’s all he’s ever known.

At the break of dawn, Meza crosses the meadow to reunite with his drifting flock. They have been guarded there throughout the night by three no-named Great Pyrenees who are trained to protect the herd from the stealthy predators. Meza is outfitted with the slightest of essentials: one peanut butter sandwich, eight ounces of water and a cell phone.

His slender frame discloses a silent log of the miles he has covered and his amber painted skin speaks of burning hours under the sun. He and his two Australian Shepherds, Patas and Churro, will push the flock across the Kaibab in an endless march over the next five months to prevent overgrazing and damage to the land. His shell of a trailer will follow behind.

In September, the pregnant ewes will be separated from the rams and hauled south to the Auza ranch in Casa Grande and in late October Meza will drive the remainder of the herd to Ash Fork, from which they’ll be transported to the ranch to join the bulk of the flock at 8,000 head. They will then spend their time behind an electric fence until January when the sheering begins.

The life of immigrant borrguerros is a hard and lonely one. But despite the endless days of isolation, working virtually 24 hours every day and the lack of physical human contact, Meza appears to be very content.

“When I get lonely, I call home and talk with my mother and father,” he said. “I do enjoy caring for the sheep, especially when I find one that’s sick or injured. I like taking care of them and getting them healthy again.”

When asked if he would want to do anything else, his reply is simple.

“I only want to take care of the sheep, that’s all I want to do,” he says.

It’s hard to imagine that a man like Meza exits in society held captive by frivolous likes, phantom friends and Amazon purchases, but it’s comforting to know that seven miles south of Williams, there is a man peacefully tending to his flock in the blissful surroundings of an open meadow.