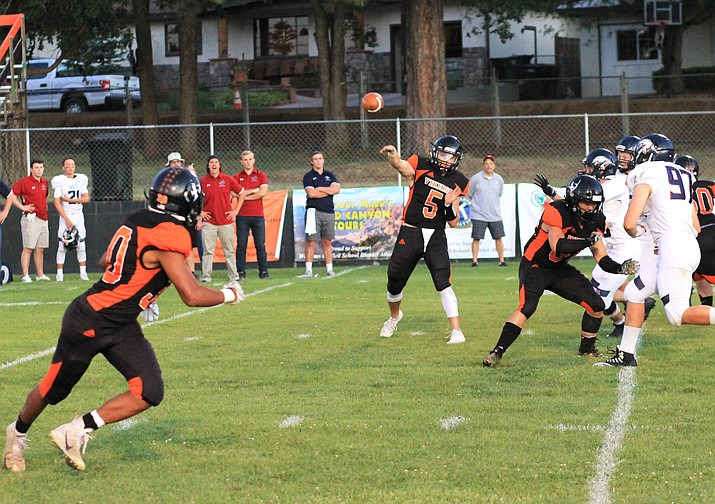 WILLIAMS, Ariz. — The Vikings gave the Williams home-town crowd a glimpse of what’s to come when they blasted past Anthem Prep 75-0 in their opener Aug. 23.

With a strong offensive and defensive line and depth in their running backs and wide receivers, the Vikings are obviously healthy and ready for a winning season. 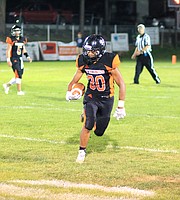 Mario Vazquez takes the ball down field for some yards. (Wendy Howell/WGCN)

“We have a solid football team this year,” head coach Jeff Brownlee said after the game. “It was nice to see our offensive line control their defensive line.”

The Vikings got on the board early in the game and left the field at half-time leading 48-0.

Although the game was lopsided, Brownlee said it was good to see the team in action and also see what some of the younger players can do.

“We were explosive all over the field,” Brownlee said. “Our defensive line is fast, strong and physical, and we can spread the ball around our wide receivers and running backs.”

Kicker David Lozano was back on the field for the first time after recovering from a foot fracture that kept him out of most of the 2018 season. Lozano made 3 of 4 extra point kicks with one block. He had 11 kickoffs, averaging 51.4 yards for 565 total yards. His longest kick was 60 yards.

“It was great to see David back on the field,” Brownlee said. “He was bringing the ball to the 1-2 yard line.”

Brownlee said their coaches had heard about the Williams eight-man program and called him to see if the teams could have an early season game.

“We have watched some game film on them and know they graduated some good football players,” Brownlee said.

The game will be the Panthers first game of the year.

“For an early contest like this and with everyone healthy, I think this will be a fun, competitive football game,” he said.

The Pahranagat Valley Panthers are known for holding the record for the longest winning streak in the history of eight-man football, when their 11 season, 104-game streak ended with a loss at the Nevada 1A state title game in 2016.