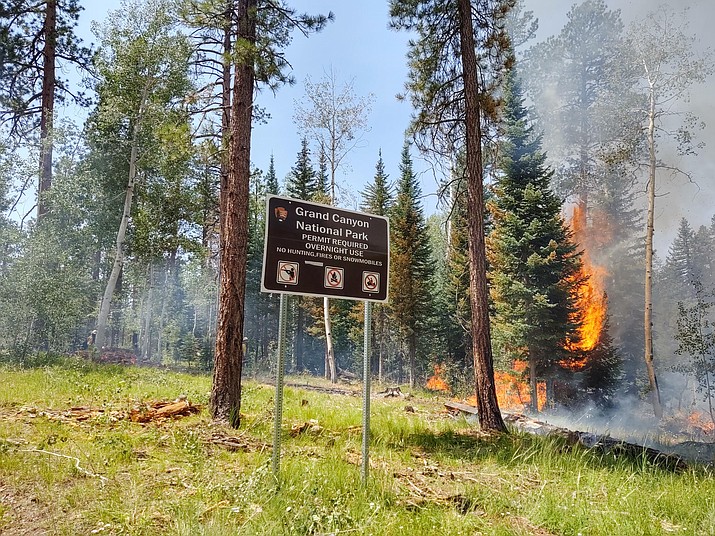 GRAND CANYON NORTH RIM, Ariz. — The Ikes Fire continues to burn within its planning area on the North Rim of Grand Canyon National Park and on the North Kaibab Ranger District.

Drier weather conditions have led to additional growth on the Ikes Fire, which is now about 6,192 acres. The lightning-caused wildfire is actively burning within a 7,785-acre planning area. The main fire will move throughout the planning area and produce smoke until significant moisture is received.

Over the past two days, firefighters made progress with firing operations along Forest Road 223. This tactic is conducted to strengthen and improve the northern boundary perimeter. Crews will move along the southern boundary, using hand ignitions to create a buffer as the main fire naturally advances to the west. Once the fire has moved throughout the planning area, smoke may still be visible from within the interior as fire moves through unburned vegetation.

Dry conditions and daytime temperatures that are slightly above average will persist over the fire site through the next few days. Precipitation is not currently in the forecast.

The North Rim Village and businesses are open. However, road and trail closures are in effect for the Ikes Fire planning area for Grand Canyon National Park and the Kaibab National Forest..

Crews will be released from the Ikes Fire and made available to assist with other wildfires across the nation. Remaining resources will patrol and hold the fire perimeter to ensure the fire remains within the planning area.