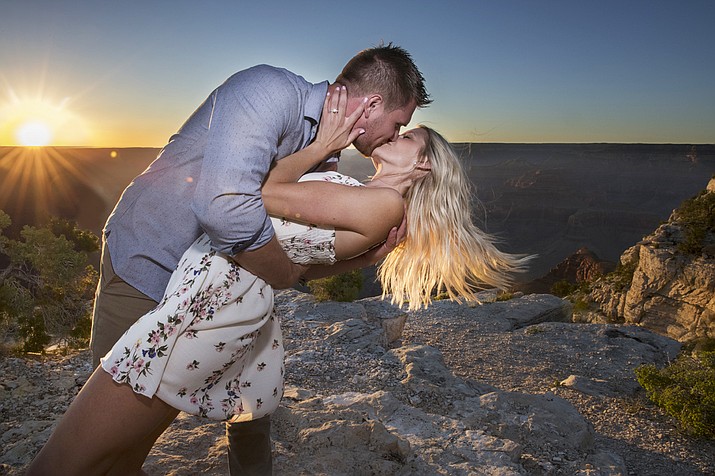 GRAND CANYON, Ariz. — Surprise Proposals at the Grand Canyon have become popular and Veronica “Ronnie” Tierney of Fresh Focuses Photography, who has filmed scores of couples, knows some of the sneakiest ways to plan the big surprise.

“When someone sees the Grand Canyon for the first time, they’re just amazed so typically the girl will be focusing on the canyon and not some crazy photographer,” Tierney explained.

Tierney said it takes a little strategy but so far she’s been successful in capturing the moment while maintaining the surprise.

“Because I use pretty bulky lighting equipment it’s pretty easy to spot me,” Tierney explained. “We plan a place to meet and I immediately have eye contact with the guy. They then follow me and I pretend to be talking on my phone and point to the area I’d like them to go. So far it’s worked out perfectly.”

After the big “I do”, the couple joins Tierney on somewhat of a short tour of the canyon.

“I’ll take them to a couple spots and depending on whether it’s sunrise or sunset, we’ll have fun for a good hour or more. We have such a good time that after the photo session the couple will typically give me a big hug. It’s really a lot of fun and the canyon has never failed to produce gorgeous pictures. Of course living here really helps a lot for weather watching and suggesting the right spot,” she said.

Tierney said she’s only had one time when the weather was uncooperative.

“It was near El Tovar Hotel last May and the couple got lost and was an hour and a half late. The weather was raining one minute and dry the next. Finally the weather cleared and the couple showed up but when we got to the point where he was going to propose, a fog moved into the canyon so thick it looked like he was proposing in a cloud. It’s the first time I’ve ever seen the weather do that,” she said.

Tierney said the next day they went to another spot and got fantastic pictures.

One proposal that stands out to Tierney was that of a private pilot, Blake Wharton, who planned his surprise proposal very carefully.

Tierney said Wharton flew into the Grand Canyon Airport one month prior to his proposal date and had Tierney pick him up to show him all the spots for proposals.

“Ronnie is an angel on earth,” Wharton said. “Everyone loved the pictures. Nikki and I are so pleased.”

Most of Tierney’s client’s are from outside the state and even international.

In 2012, Tierney’s husband, Dan, accepted the position of Controller for Xanterra South Rim Operations. Previously, they lived in Napa, California where he worked for Silverado Resort, who at the time was managed by Xanterra. It was here that Tierney started her photography business photographing vineyards from her bike and finally weddings, real estate and portraiture. Tierney studied and received a degree in Journalism, Public Relations at Northern Arizona University (NAU) and Adobe Photoshop Certification from Santa Rosa Junior College. She has been professional for 14 years.

More information is available at www.freshfocuses.com