Bear activity in Parks’ community being monitored by Game and Fish 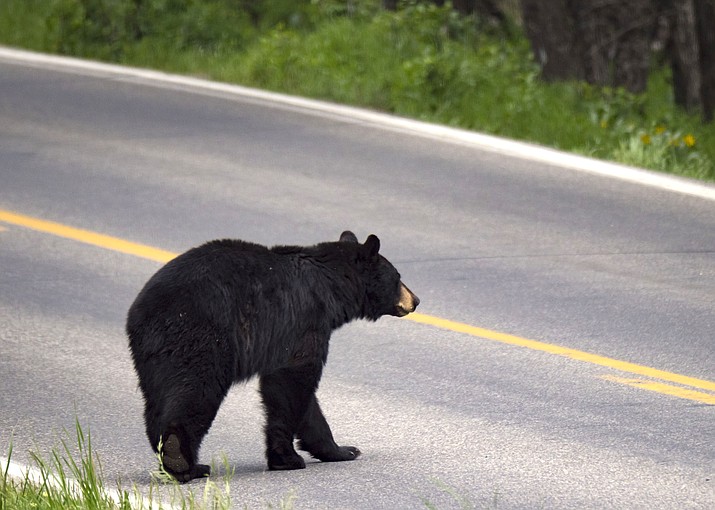 A recent increase in black bear sightings has been reported in the Parks area. (Stock photo)

PARKS, Ariz. — Parks residents are getting a gentle reminder that they live in bear country with several recent sightings of bears being reported throughout the community.

According to Arizona Game and Fish Department Wildlife Officer Colby Walton, the department has received several reports of bears getting into dumpsters, bird feeders and even a bee hive in the Parks area.

“This is pretty typical stuff, nothing out of the ordinary for sure,” Walton said.

AZGFD takes bear sightings and activity seriously and tries to prevent the bears from becoming a nuisance.

“We first try to get rid of whatever is attracting the bears and in most cases that will alleviate the problem,” he said.

Walton said bear activity typically increases in the Parks area during the dry months of June-August, and bears typically move back into the forest after the monsoons.

“This time of the year is usually kind of the tail-end of it and after August there is more food available and they will move back into the forest,” he said.

Although there hasn’t been much of a monsoon season, Walton believes the bears will be moving back into the forest soon.

“We’ve had a pretty typical year,” he said. “I’m always getting sightings in Parks, but I’ve never had to set a trap in Parks. It’s always been that once we remove the food source, the bear moves on.”

Walton said he’s a bit more concerned with the recent bear sightings in Parks, which include one report taken for a bear that was found digging in the dumpster at Maine Consolidated School.

“If he hits the trash can again I will put a trap out there,” he said. “It’s a little bit of an elevated situation since it’s the school.”

Walton said AZGFD evaluates bear activity differently depending on the community. He said removing the food source usually takes care of the problem.

“I’ll have the same spots that have a bear problem every year and we will go in, trap bears and relocate them, and then a new bear will come back into the same area,” he said.

Walton said he encourages people to report bear sightings or bear activity to the department as soon as possible.

“Any kind of bear activity needs to be reported to us so we can document the bear and we can make the right decision on what we are going to do with the bear,” he said.

Walton said it can become a problem if bear activity isn’t reported.

“The problem we’ve had in the past is when a little pocket neighborhood doesn’t report it and it goes unnoticed for a few days or weeks,” he said. “All of a sudden we have a bear that’s not just knocking over trash cana but is now sticking his nose in doggie doors.”

Walton encourages residents to be vigilant with their safety while the bears are in the area. He encourages people to make noise when going outside at night or in the early morning hours.

“Turn lights on and be kind of loud,” he said. “Don’t walk quietly and startle a bear.

Walton said he believes there is not real threat at this point and that the bears are doing their typical activity.

“But we’ll monitor it and see what happens,” he said. “We always play this game at this time of year. There’s plenty of bears in the Parks area, this isn’t an odd thing by any means.”

AZGFD urges Arizona residents to refrain from feeding wild animals to keep wildlife wild. Report aggressive or unusual animal behavior to the Arizona Game and Fish Department at (800) 352-0700 at any time, day or night.