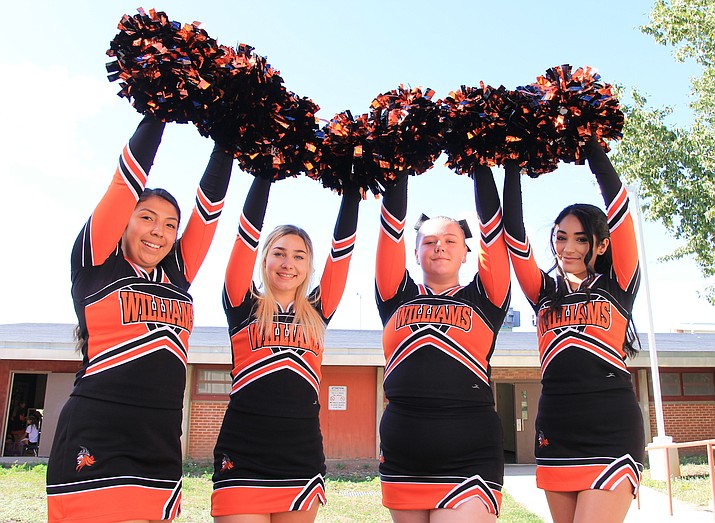 WILLIAMS, Ariz. — With a record 20 girls showing up for the Williams High School cheerleader team this year, head coach Elizabeth Vasku is excited for the season.

“It’s the largest squad we’ve had,” she said. “We don’t have a lot of inexperienced girls this year, so we are able to just review fundamentals and then get into the harder stuff a little more quickly.”

Vasku been an assistant coach at the middle school and high school levels, and is entering her first year as the head coach without an assistant.

“But luckily I have mentors and good parent support,” she said.

The cheer team has plans to not only cheer at football games, but to also become more involved with community projects and school activities.

“Football games are the fun part of what we do,” she said. “We perform at halftime every home game as well - doing about a two minute choreographed routine.”

Vasku said the team also plans to add competitions to their cheer season this year, with two scheduled for October and November.

“We will be competing in the “Game Day” division,” she said. “So we will be incorporating more signs and megaphones into our regular cheers as a way to practice with these props.”

Vasku said the community will see a change-up in the cheer routines at the home football games.

Over the summer, Vasku held a camp and many of the girls went to a professional camp in Phoenix.

“We do endurance and strength conditioning as well as skills training,” she said. “We try to focus on either choreography or cheers every day.”

Vasku is certified as an interscholastic coach and is required to attend training and classes through the Arizona Interscholastic Association.

“We are a squad that stunts — training includes a lot of trial and error,” she said. “Training to compete is a different beast though. Everything has to be perfect and calculated.”

After training and attending camps all summer, Vasku said the girls are excited for the cheer season.

“I think it’s hard for the new girls to get it until they are in their uniforms, under the lights and in front of the crowd on Fridays,” she said. “We have an amazing group of rookies this year though and they are making the rest of us excited to have them with us. It has been a different type of feeling this year though as we are training to compete, and that is a first for us.”

The girls will cheer at the first home football game Aug. 23 at 7 p.m.