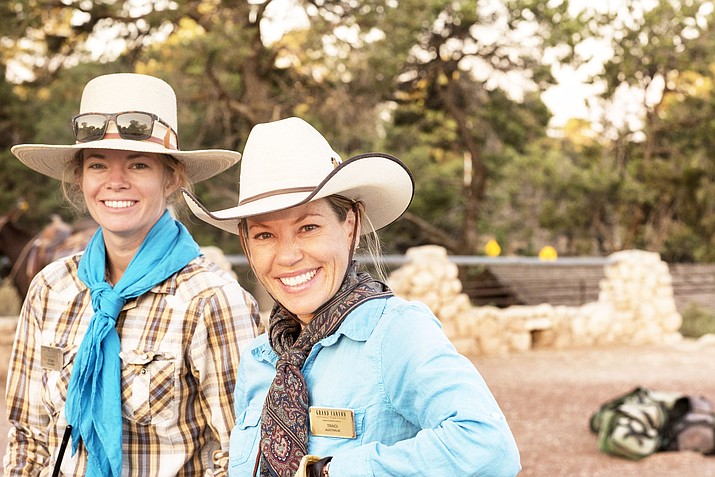 Teigan Babcock (left) and Traci Dolan have formed a lasting friendship after meeting as wranglers at Grand Canyon in 2018. (Veronica Tierney/WGCN)

PHANTOM RANCH, Ariz. — Finding common ground can happen anywhere… even on the trails of the Grand Canyon where wranglers Traci Dolan and Teigan Babcock have found their “long-lost twin.”

Not only do the two Xanterra South Rim Wranglers look alike, they have similar backgrounds. Both have lived in Japan and have worked in veterinary positions, they have one sibling and they love mules and wrangling.

“We had an instant click,” said Dolan, whose home base is in Australia. “An instant sisterhood. Some of the barn staff thought we wouldn’t get along because we’re so much alike.”

Because of scheduling, the two, don’t always work together, but when they do have the opportunity to work the Phantom Ranch ride, sparks fly.

Getting ready for the ride, Teigan (right) helps Traci adjust her scarf. On their off time, they like to romp around the waterfalls near Phantom Ranch, swim in the river and take hikes. (Veronica Tierney/WGCN)

With Kleenex held tightly, Traci Dolan (right) and Teigan Babcock say their final goodbyes last October — neither had any idea that Traci would return to Grand Canyon. While apart, the two messaged each other every day. (Veronica Tierney/WGCN)

“We met in 2018 here at the canyon. I worked here for four months, then decided to return last July. We like to call ourselves Tn’T, because we’re a dynamite team,” Dolan said.

“Teigan and Tracy are a great example of how good the wranglers get along here,” said Nora Berry, director of Transportation, Xanterra South Rim Operations. “They are both good workers and we’re glad to have them on board.”

Dolan was born in Japan, raised in Alaska and went on an exchange program to Australia and loved it so much she married and made it her home.

“In 2017, I was a guest and did the ride to Phantom Ranch and I thought to myself, I can do this kind of work,” she said.

So the next year Dolan applied, got the job and met her “sister from another mister.”

Back home in Australia, Dolan works as a domestic and international flight attendant.

“I took a year off from my job so I could come back and work here,” she said.

Born in San Diego, Babcock has been wrangling at the Grand Canyon for two years.

“After spending four years in Japan, I moved back to the states,” she said. “I heard about the wrangler job from a friend who lived here.”

Babcock’s friend suggested she apply for the seasonal wrangling job, so she did and found she enjoyed the work, in part because of her co-workers.

“When Traci came to work here it was like discovering a long-lost relative,” Babcock said. “We have so many eerie similarities and we work so well together.”

One of Babcock’s favorite memories is when she and Dolan switched cowboy hats during morning instruction at the Bright Angel Trailhead and their manager couldn’t figure out who was who.

“Of course we were wearing the same color shirts, which happens a lot even when we don’t plan it,” Babcock laughed. “Traci has helped me work through personal growth; I’m so glad the canyon threw us together.

“There’s canyon magic at play and you can’t convince me otherwise,” Babcock added.

“Those two are really something else,” said Matt Joseph, Xanterra Pack Barn supervisor. “Seeing them interact is both a comedy and romance. They have one of the tightest friendships I’ve ever seen and are some of the kindest people I’ve met.”