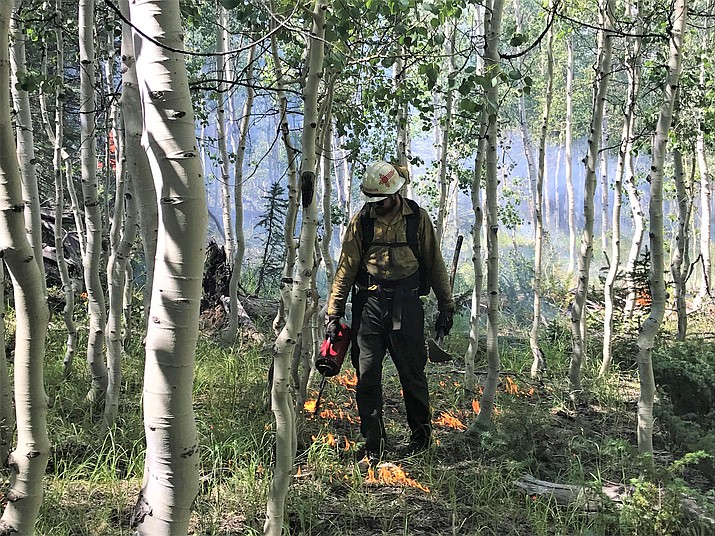 As of Aug. 18, fire crews continue to patrol and hold the northern boundary and improve line on the Ikes Fire.

The Ikes Fire is located along the northern area of Grand Canyon National Park and Kaibab National Forest. It poses no danger to structures or local infrastructure.

There are currently 93 resources assigned to the fire, which has spread across approximately 4,839 acres within a 7,738-acre planning area.

Although drier conditions remain, the fire is moving at a good pace through the predetermined planned area, according to fire managers. The fire is presently backing down drainages and moving along the forest floor at a low to moderate intensity through accumulations of dead vegetation and overgrowth.

Firefighters on the southern boundary have lit debris piles constructed in the early phases of line preparation, which deprives the fire of excess fuel as it spreads to the west.

On Aug. 19, firefighters proceeded along the southern boundary to utilize hand ignitions to remove fuels ahead of the advancing fire and create a buffer. Fire managers will assess conditions throughout the day in order to determine if additional aerial ignitions will be utilized. Crews will patrol and hold line along the northern and eastern boundaries.

Smoke from the Ikes Fire, along with other fires in the area, will be visible throughout the surrounding area.

The Castle Fire, discovered July 12, has burned through about 96 percent of a 19,368-acre planning area.

Dry air moving into the region is keeping the Castle Fire active as it moves into unburned vegetation within the planning area.

As of Aug. 18, fire crews successfully continued to hold and patrol the fire perimeter. Firefighters gridded the area for new spots where spots had occurred Aug. 17 and found none.

Fire crews will focus on patrolling and holding the fire if necessary. Additional resources ordered are on scene working to ensure fire stays within the planning area perimeter. After aerial reconnaissance Aug. 18, fire managers said they felt confident the Castle Fire is meeting identified objectives.

Smoke is visible from surrounding communities and is expected to settle in the valleys during early morning and late evenings and then clear out by mid-morning. Local air quality and related information, is available at www.airnow.gov or the Smoke Management Division of the Arizona Department of Environmental Quality.

The Castle Fire is located approximately 11 miles south of Jacob Lake, three miles west of Highway 67 and just east of Forest Road 761 near Oquer Canyon on the North Kaibab Ranger District of the Kaibab National Forest.