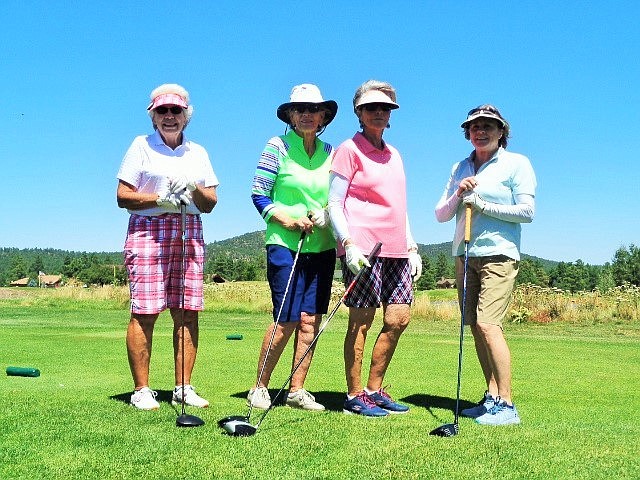 The sun poured down on the emerald links as 40 participants dug in their cleats and swung their clubs in support of the Williams city pool.

Phillip Echeverria and Dr. Cesareo Vasquez pause for a picture on Hole 13 Aug. 17. (B. Garibay/WGCN)

Over the last decade, the Friends of the Williams Aquatic Center have utilized funds raised from the tournament to promote the swimming pool and purchase items such as a washer/dryer, new deck furniture, a water treadmill, waterproof TV for deep water aerobics and free swim passes for local children. Donations acquired at the tourney not only come from the participants, but from three tiers of more than 20 sponsors.

As the mid-day sun rolled to the center of the sky, the tournament concluded in the club house with a backyard barbecue, a raffle consisting of over twenty donated prizes and the awarding of sponsor appreciation plaques. While the local tournament is filled with fun and feisty sportsmanship, fundraising is an extremely arduous task, and the Friends of the Aquatic Center are no exception to the rule.

The group is represented by a shallow pool of board members, including Kris Vasquez, Tom Hooker, Cathy Bates and Jeana Stevenson. With a slim list of volunteers, these four individuals selflessly relinquish their time searching for new avenues to raise awareness of the Center’s many benefits while gathering community support and raising money.

“We are always looking to gather more volunteers with fresh and creative ideas,” said Stevenson.

The board has faced an uphill battle over the years after losing several sympathetic members and the encouragement of the local city government. The city of Williams shoulders the task of day to day maintenance as well as general and unforeseen expenses that occur, but any extra amenities required to support and promote the center are funded through the Friends. A major struggle for the Friends of the Aquatic Center has been educating the local government that the pool is not just for children, but is also a significant asset to the adult population of the community.

“People within the community who have diabetes, have had strokes or hip surgery would benefit greatly by simply coming in and walking around in the pool,” said Vasquez. “We have purchased a treadmill years ago that most people don’t even know is there.”

Vasquez would like to see the Center placed on the same pedestal as the golf course, but without a stronger city support structure, that may be a drowning ambition.

As the tournament came to a close and was scored as a success, a gracious thank you was given to all those involved and a solemn seed was strewn about that more help is always welcome. More information on involvement or donations is available from the Williams Aquatic Center at (928) 635-3005.