Diamondbacks score 3 in 8th to rally past Rockies, 5-3 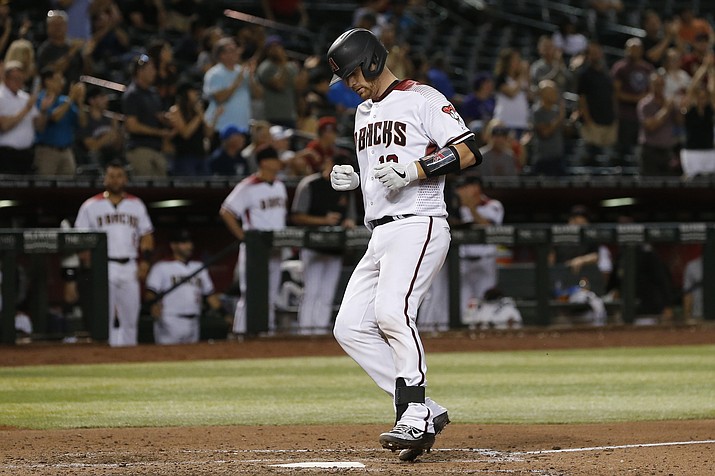 PHOENIX (AP) — Carson Kelly is looking more and more like the big-hitting catcher the Arizona Diamondbacks have sought for some time.

Kelly's tiebreaking homer in the eighth inning was part of a three-run rally that sent the Diamondbacks to a 5-3 victory over the Colorado Rockies on Monday night.

"When you get an offensive catcher as capable as Carson, it adds a whole new dimension and some thickness to your lineup," Arizona manager Torey Lovullo said. "They don't come around very often."

Kelly's 18 home runs are tied with Miguel Montero (2011) for the most by a catcher in one season in club history. The 25-year-old who was part of the Paul Goldschmidt trade with St. Louis last offseason has 13 homers while hitting eighth in the order, the highest total in the majors.

"Cool!" Kelly said when told he matched Montero, a two-time All-Star. "Early on, as a young player not having a ton of success, and then finally seeing the work that you put in over the years pay off at the highest level, it just makes me motivated to continue getting better."

David Peralta added a two-run triple in the eighth, making a winner of reliever Yoan Lopez (2-5) after he got two outs in the top of the inning.

"He would like to have that pitch back," Rockies manager Bud Black said. "If you get back that hanging breaking ball to Kelly, that was sort of the back-breaker for Wade."

Ketel Marte also homered and starter Zac Gallen allowed a run and five hits over six innings in his third start for the Diamondbacks since arriving in a trade with Miami on July 31. He struck out eight and walked six.

Archie Bradley allowed Charlie Blackmon's 27th home run in the ninth — Blackmon's third straight game with a homer — but earned his fifth save. Arizona climbed back to .500 at 63-63, while the Rockies' four-game winning streak ended.

Tony Wolters had two hits and two RBIs for Colorado. Chi Chi Gonzalez held the Diamondbacks hitless for five innings before Kelly lined a first-pitch single to center field to open the sixth.

The next batter, pinch-hitter Josh Rojas, hit a fly ball toward the left-field corner that looked as though it would fall for a hit. But outfielder Raimel Tapia made a long run and a diving catch as he hit the turf.

One out later, Marte drove Gonzalez's fastball beyond the pool deck in right-center for his 26th home run to give Arizona a 2-1 lead.

The Rockies tied it in the eighth against reliever Andrew Chafin. Daniel Murphy led off with a single, Ryan McMahon singled with one out and Wolters drove in Murphy with a base hit.

But then Diamondbacks shortstop Nick Ahmed, who an inning earlier leaped to catch Trevor Story's line drive, keyed a 1-6-3 double play with a rushed but accurate throw.

After three scoreless innings, Gallen struggled to find the strike zone. He struck out the first two hitters in the fourth, but loaded the bases on a single and two walks. Wolters drew the third walk of the inning, allowing Murphy to trot home with the game's first run.

"Six walks is not going to sit well with me, but we got a win and that's what matters," Gallen said. "Just got to keep us in the game so we can do things like that."

The announced attendance of 15,443 was the second-smallest crowd of the season for a Diamondbacks home game.