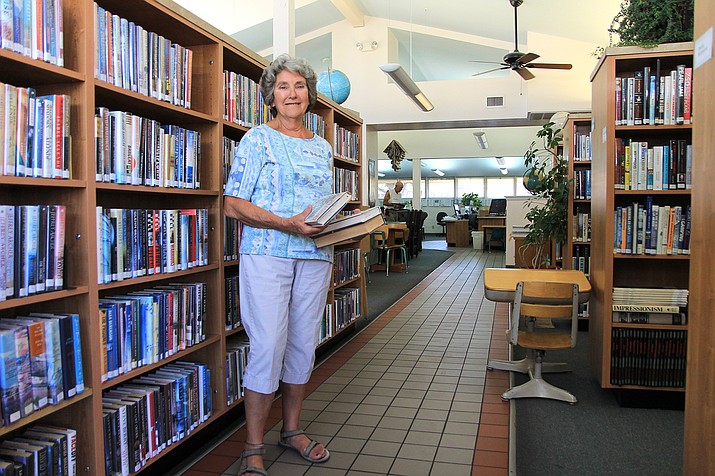 Andrea Dunn is set to retire after 30 years as the head librarian at Williams Public Library. (Wendy Howell/WGCN)

WILLIAMS, Ariz. — Though libraries might be known as places of quiet, Andrea Dunn has found that the life of a librarian is anything but dull.

Dunn has seen the library change from a small room with a few books to a community center where patrons use computers, check out DVDs and catch up on the history of Williams through photo archives.

When Dunn took over as head librarian, the library was about one-third of the size it is today. In addition to her library duties, she spent much of her time applying for grants and finding funding for library projects.

“I love books and I really love the people,” she said about her experience at the library. “Expanding the library has also been one of the most wonderful things.”

Dunn was also instrumental in creating the Williams Historical Photo Archive and the development of the history room at the Williams Visitor Center.

“The historical photo project has been the most fun of all,” she said. “When my grandson was little I was writing guest columns for the newspaper and would take him on these hikes. My original intent was to do a local hike and find the history of it because it’s fascinating.”

Dunn began writing a column for the Williams News about her hikes and began visiting the Kaibab National Forest offices to sort through the archives for historical information.

“So that’s when Margaret (Hangan) showed up and asked if I would like to work together on the history stuff,” she said. “Hubert Clark had already started the photo collection and had a good start.”

Dunn said she and Hangan expected to spend a few weeks on the project that began in 2009, but the popularity of it continues today and now includes several instrumental volunteers including Kathy and Mike Benham, Jeana Stevenson, Linda Reynolds and Al Messimer.

“The history thing has been so much fun,” she said. “As a group we are trying to get more oral histories to add to the collection because we are quickly losing our old timers.”

Dunn said another moment she will always remember is when construction at the library revealed a time-capsule placed years earlier.

“Behind a plate was the cornerstone from the old library and a time capsule,” she said. “We didn’t know it was there til we took the plaque off. We added a few coins and a library card and put it back.”

Dunn said she found that working at a small-town library is different than larger libraries because of the ability to get know the patrons.

“You get a feel for what people are interested in,” she said. “It is really fun, because you get to pick out new authors no one has ever heard of.”

Dunn said funding for the library is split between the city of Williams and Coconino County. Funding for new books mostly comes from the county and grants.

“We get the New York Times Book Review, Publisher’s Weekly and others and watched the newspapers to learn about best sellers,” she said.

Dunn said she leans toward bestselling fiction for the patrons at the library.

“I don’t have many people reading nonfiction, although biographies are popular,” she said. “It’s really tough now with kids and junior nonfiction. Those kids are going straight to the internet for their information now.”

Prior to coming to the library, many remember Dunn for the work she put into the Williams Summer Rec program and time spent as a special education aide at Williams Elementary-Middle School.

“It was pretty intense,” she said. “I was doing Summer Rec and then I got this job and would work from 6-8 p.m. every night.”

As she looks back on her time as the librarian, Dunn said she will mostly miss the people.

“It has been really enjoyable,” she said. “People come here because they want to be here. Its not like being in a doctor’s office where they don’t feel good to start with. I’ve only had a few challenging moments.”

Although Dunn doesn’t officially retire for another few weeks, she said she already has been seeing the benefits of being semi-retired.

“I’m really excited because I’ve found I can start something and really finish it,” she said.

In addition to more hiking, kayaking and reading, Dunn said she plans to spend a lot more time on the Historic Photo Project.

But she said she will miss seeing the patrons, her friends and coworkers.

“The running of the library on a day to day basis counts heavily on dedicated staff, and Sherry Sleeper has been instrumental in fulfilling that capacity for the past five years,” she said.

Dunn said there is one thing she won’t have to miss though — books.

“I don’t have to miss the books,” she said. “But now I’ll let someone else buy them and I’ll just come in and read them.”