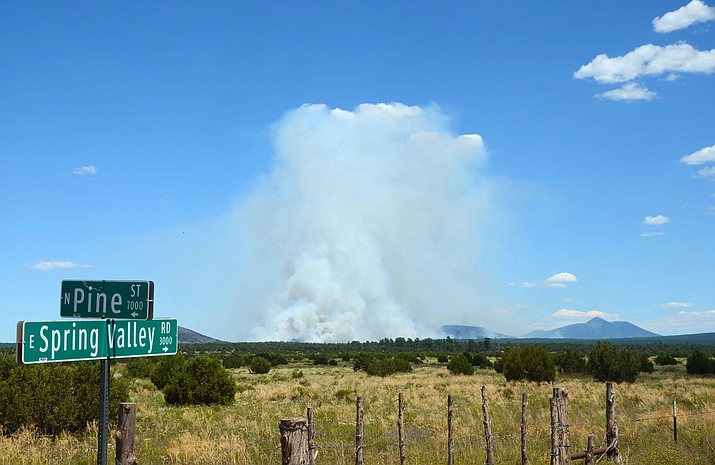 The Boulin Fire continues to be highly visible from the surrounding rural communities with heavy smoke impacts reported. (KNF/photo)

Unchanging warm temperatures and low relative humidity have persisted allowing fire to carry through the available fuels inside the planning area. Weather forecasts indicate the fire will potentially spread to the southwest perimeter later this week reaching its full potential.

The Boulin Fire, discovered on August 6, was caused by lightning and has grown to approximately 2,822 acres. It is located near the junction of forest roads 141 and 713 approximately 9 miles north of Interstate 40 at the northwest corner of Spring Valley. It is currently 30 percent contained.

Managers will use multiple strategies that will ultimately contain this fire within a defined planning area of approximately 4,200 acres. Fire will be allowed to move towards designated roads that serve as safe and effective control features. Fire activity may fluctuate periodically as daily weather conditions influence fire behavior and spread.

Operations have been successful in meeting multiple objectives and all containment lines are holding with no control problems occurring.

Fire behavior continues to burn with a low to moderate intensity backing through grasses and ponderosa pine litter consuming dead and down fuels. Crews periodically ignite the edges of the containment lines to stay aligned with the fires natural progression.

The Fire has been expanding an average of about 400 acres per day. Fire has now carried through approximately two thirds of the planning area and is moving toward the southwest containment line.

The Boulin Fire continues to be highly visible from the surrounding rural communities with occasional increases in activity. There have been no control problems to date.

Additional information about the Boulin Fire, and the Kaibab National Forest can be obtained through inciweb.nwcg.gov/incident/6511/