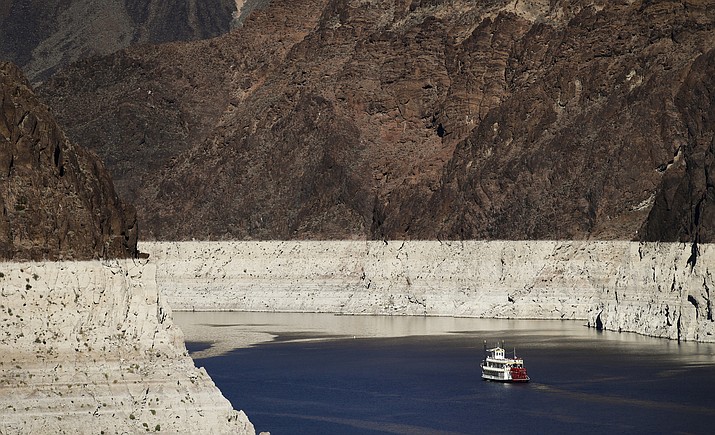 In this Oct. 14, 2015, file photo, a riverboat glides through Lake Mead on the Colorado River at Hoover Dam near Boulder City, Nev. For the seven states that rely on the Colorado River that carries snowmelt from the Rocky Mountains to the Gulf of California, that means a future with increasingly less water for farms and cities although climate scientists say it's hard to predict how much less. The U.S. Bureau of Reclamation released its projections for next year's supply from Lake Mead, which feeds Nevada, Arizona and California. (AP Photo/Jae C. Hong, File)

ALBUQUERQUE, N.M. (AP) — Arizona and Nevada will face their first-ever cuts in Colorado River water next year, but the changes aren't expected to be overly burdensome for either state.

The water is delivered through Lake Mead, one of the largest manmade reservoirs in the country that straddles the Arizona-Nevada border.

For Arizona, that means less water for underground storage, recharging aquifers and for agricultural use. About 7% of its 2.8 million acre-feet, or 192,000 acre-feet, will be left behind Lake Mead.

That's about the same amount Arizona voluntarily has given up for a few years, said Chuck Cullom, Colorado River programs manager for the Central Arizona Project, which gets more than half of Arizona's entitlement to the Colorado River.

Nevada won't see the effects of its 3% cut. The state's allocation is 300,000 acre-feet annually, but it's on track to use about 225,000 acre-feet this year, said Bronson Mack, a spokesman for the Southern Nevada Water Authority. An acre-foot equals nearly 326,000 gallons (1.2 million liters) and is enough to serve one to two average households a year.

"Conservation has reduced our water use significantly enough that we can make these contributions to the drought contingency plan without impacting future water," he said Friday.

The states joined California, Colorado, New Mexico, Utah and Wyoming in signing the drought plan earlier this year that raised the bar for triggering shortages. Under the 2007 guidelines alone, a shortage would not have been declared until Lake Mead dropped below 1,075 feet (327 meters), and the cuts would be more drastic.

The goal is to keep Lake Mead fuller so it can continue delivering water downstream and producing hydropower. The drought plan also loops in California on water cuts.

Mexico will give up 3%, or 41,000 acre-feet, of its 1.5 million acre-feet of water next year under a separate accord. Under the drought contingency plan, Arizona, Nevada and Mexico can recover the water they're giving up to Lake Mead if the reservoir rises to a certain level.

The cut to Arizona represents about 12 percent of the Central Arizona Power water supply, and Cullom said the utility will eliminate water deliveries to underground water banks and for replenishing aquifers.

Cullom said the utility has provided incentives to farmers to reduce their reliance on the water delivered through a series of canals since 2015 in preparation for any shortages. The agricultural pool of water will see a 15 percent reduction next year, he said.

Most farmers don't rely solely on the Central Arizona Project but instead have a mix of water sources that include other rivers and groundwater.

"I don't see it as an overall net reduction of water for irrigation districts in Maricopa County, it will just be rebalancing of water that they're using," said Shane Leonard, general manager of the Roosevelt Water Conservation District in Maricopa County.

The cuts come despite a wet winter across much of the West, one of only five years that saw above-average precipitation in a 20-year drought, said Terry Fulp of the U.S. Bureau of Reclamation.

"We've got to stay diligent, we have got to stick to the plan," he said. "We're not out of the woods yet."