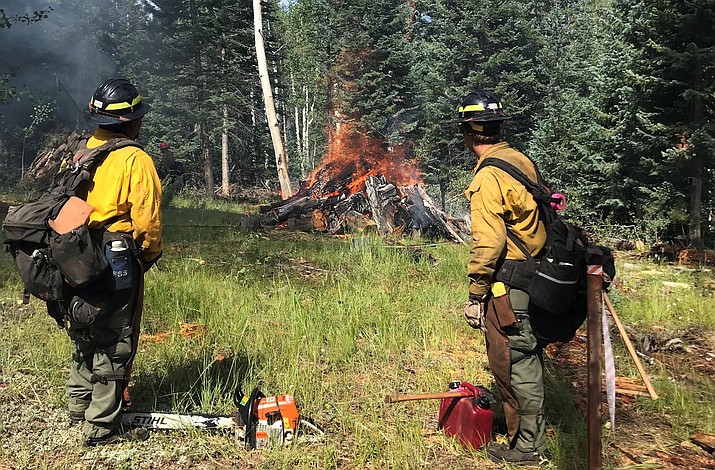 Following four days in a row of no growth, the combination of increased daytime temperatures, light winds, no precipitation and available fuels were enough to encourage additional spread. Aerial ignitions and firing operations were also successfully conducted to help check and direct the fire’s movement through the canyon.

Mastication work along Forest Road 226 continues and firing operations along the fire’s southeastern perimeter are helping to fortify the control lines. Firefighters are making excellent progress and staying ahead of the fire, while ensuring that the firing operations are effective and conducted safely.

Under favorable weather conditions, the Castle Fire is expected to continue working its way through Lookout Canyon toward Dugway. Smoke will be visible as fire behavior increases during the peak burning period which is mid-day to late afternoon.

Soon after the Castle Fire started on July 12, fire managers pre-identified the 19,632-acre planning area where the lightning-caused wildfire would be allowed to fulfill its natural role within a fire-dependent ecosystem. The fire has burned through 88 percent of the planning area, burning through a significant amount of dead and down trees and some mixed conifer species. By allowing the wildfire to naturally burn through this area, the ecosystem will become healthier and more resilient.

The Castle Fire poses no danger to structures or other local infrastructure, but a temporary closure order remains in effect.

The Ikes Fire has grown to 85 acres due to warmer, drier weather over the past few days. An increase in fire activity is occurring on south facing slopes due to more direct sunlight allowing vegetation to dry out from recent monsoonal activity. Fire continues to spread along the forest floor through the understory and duff layer.

Around 40 fire personnel are assigned to the Ikes Fire. Firefighters are working to improve control lines along the National Park Service W4 Road and Forest Road 223. These roads serve as the southern and northern boundaries of the fire’s planning area.

Over the coming days, firefighters may conduct firing operations in order to keep fire activity at a low to moderate intensity. This method is used to strengthen control lines by decreasing the amount of vegetation available to the Ikes Fire as it naturally spreads toward the designated planning area boundaries. Firing operations are weather dependent and may produce smoke visible to the North and South Rims of the Grand Canyon.

The Ikes Fire, which started on July 25 because of a lightning strike, is located 3 miles east of Swamp Point on the North Rim of Grand Canyon National Park. The fire is less than 1 mile south of the boundary with the North Kaibab Ranger District of the Kaibab National Forest. Closures remain in effect for the Ikes Fire.

Fire managers will continue the strategy of confinement and containment for the Ikes Fire planning area while providing for point protection of identified sensitive natural and cultural resources. The Ikes Fire poses no danger to structures or local infrastructure.

Over the weekend, Grand Canyon identified three lightning caused fires. The Royal Fire, Sinkhole Fire, and Outlet Fire located on the North Rim of Grand Canyon National Park are 100 percent contained due to full suppression tactics. Suppression tactics include firefighters building containment line around the perimeter and receiving aerial support from helicopter bucket drops. The Outlet Fire may produce visible smoke to the west of the North Rim Lodge.