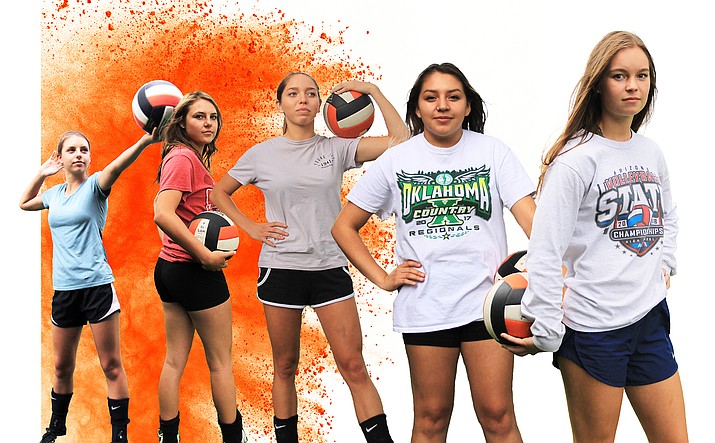 WILLIAMS, Ariz. — With the loss of just one senior to graduation, the Williams Vikings are back, focusing on a winning season at a high level of play. 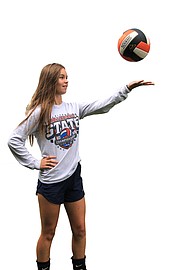 Madi Olson is a senior player for the Williams Vikings. (Wendy Howell/WGCN)

The Lady Vikes have just begun their official season, but are coming into the year in great form after a summer of conditioning and camps.

“I had an excellent summer program,” said Head Coach Connie Stevens. “We did a lot of team building.”

After an 18-5 season in 2018, many of the girls got a jump on the 2019 season this summer. Stevens said the girls met weekly and divided into teams to play round-robin style games.

“We played each other for 20 minutes, then switched it,” she said. “We now have 28 girls out for the team.”

Stevens said she is pleased with her returning players and said she has a large up and coming crew of freshmen and sophomores.

“I run my middle school program like my high school program,” she said. “I’m already a step-up. I’m pretty excited that they know what is going on.”

Kennelly and Chism led the team last year with 89 kills, followed closely by Ford with 86. Echeverria led the team with 14 serving aces. 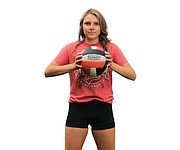 Maegan Ford is a senior player for the Vikings. (Wendy Howell/WGCN)

Mortensen led the team with 40 blocks, followed by Ford with 20. Ford also had 230 digs followed by Olson with 208 and Mortensen with 207

“Basically we should be strong,” she said. “We are focusing on serving and eliminating mental errors.”

Stevens said in addition to physical training this summer, the girls spent a lot of time together.

“We went to my house and had a cookout, played games and went kayaking on one of the lakes,” she said.

Despite the successful 2018 season, Stevens said she plans to work with the girls on stepping up their level of play.

“One thing we struggle with is finishing the game,” she said. “Sometimes we don’t take it over the top. If we are playing a weaker team we often play at their level and we need to step up.”

With the Vikings being the only 1A Central team to make the state playoffs, Stevens said it has been difficult to find challenging regional games.

“The problem is we get to state and we’re not ready,” she said.

Stevens said Mogollon will again be one of the more challenging teams the Vikings will face this season.

“Mogollon should be tough competition this year,” she said. “They are going to be very strong.”

Mogollon lost just one set in the 2018 state playoffs, and eventually beat St. David at the state championship 3-0.

The Lady Vikes have a scrimmage with Mohave Accelerated August 24, and have their first regular season game September 3 against Northland Prep Academy at 5 p.m and 6 p.m. at home.