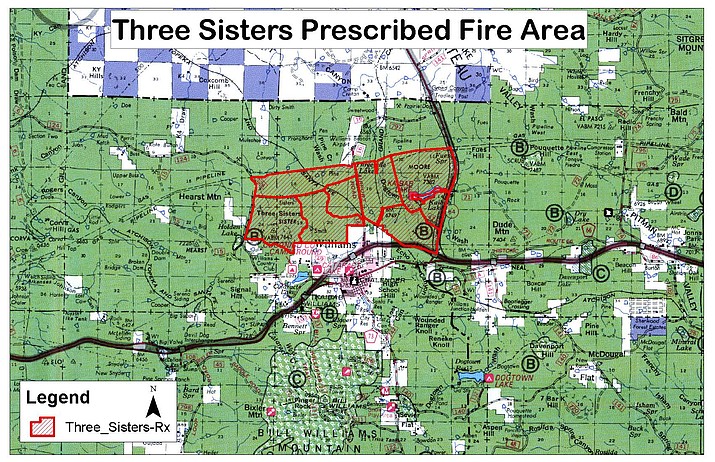 WILLIAMS, Ariz. — Residents of Williams are being advised of a large prescribed fire being planned for an area just north of the city’s boundary this fall.

Fire managers with Kaibab National Forest are planning a 7,676 acre prescribed fire in an effort to protect the Williams community from a catastrophic wildfire. The project has a tentative mid-September starting date that could extend into October.

Mike Uebel, Assistant Fire Management Officer with Kaibab National Forest, presented the project to the Williams City Council Aug. 9. He said the prescribed fire will be one of the largest prescribed fires the community has seen so close to town.

“We’ve done this before with smaller acres close to town,” Uebel said. “But in the past these big acres have been 12 miles away, 14 miles away and there were some impacts to Williams but nothing quite like we are expecting.”

Uebel said the prescribed fire, labelled the Three Sisters Project Area, ranges from State Route 64 on the east side to Forest Road 124 on the west side. It then is bordered by the natural gas pipeline to the north and ends at the north edge of town.

“It will be literally coming up to the backdoor of Loves,” Uebel said. “It will be behind the golf course also.”

Uebel said the forest service deems the area important for the protection of Williams from wildland fire.

“It’s really critical habitat we need to burn — its right at the urban-wildland interface,” he said. “If a wildfire starts in there it can really threaten our community. The reason we are doing it is for the protection of this town.”

Uebel said the burning will be technically difficult and prescribed fire specialists will be using a helicopter for ignitions. Previous fires near town were started with hand ignitions.

“Our tactics for it will be through aerial ignitions which the community isn’t used to seeing,” he said. “We’re going to be flying a helicopter and dropping balls out throughout the project.”

Uebel said the project has been in the works for over a year. He said fire managers have spoken to land owners who are adjacent to the burn area and are revisiting them as the project gets closer.

“We had a partners meeting yesterday where we talked about it with a lot of the entities we work with,” he said.

Uebel said the project plan is to burn nine different blocks quickly which could result in large plumes of smoke.

“Burning that close to town, the first thing you are going to see is very large smoke plumes, “he said. “Each block is anywhere from 700 acres to 1,800 acres. When you burn 1,800 acres in a short time period it can look pretty daunting.”

Uebel said managers are attempting to minimize smoke impacts to the community.

“Visually there could be a lot of smoke,” he said. “But we are going to burn under conditions that allow it to burn clean, so it burns quickly. We are going to try to burn it as quick as we can in the morning and then we are done with that block and then all afternoon it can be allowed to vent out.”

Fire managers plan to evaluate the conditions in an effort to reduce the amount of smoke that rolls into town.

“Town is just a little bit lower than everything else around us,” he said. “Smoke runs like water and it will want to settle down in town, so we expect overnight effects in town could be light to moderate depending on all of the environmental conditions.”

Uebel said smoke could settle over State Route 64 and Interstate 40.

“Were planning a 7-15 year burn interval,” he said. “This area will be followed up with timber sales and thinning. We don’t burn and then walk away from it.”