Diamondbacks use 3 homers in 6th to rally past Rockies 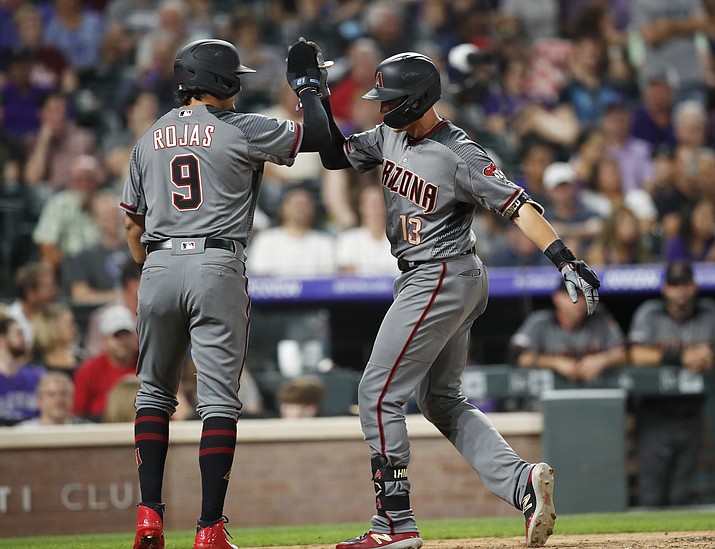 DENVER (AP) — Somewhere around the fifth inning, Josh Rojas began to gaze around the ball park and a particular thought dawned on him.

"I realized I'm in the big leagues right now," the outfielder said after his major league debut. "This is pretty crazy."

It took him a couple innings to settle in before making a big impression. The same goes for his teammates.

Jake Lamb, Nick Ahmed and Carson Kelly homered during a four-run sixth inning as the Arizona Diamondbacks rallied for an 8-6 victory over the reeling Colorado Rockies on Monday night.

It was the Diamondbacks' 27th comeback win of the season and keeps them in the thick of the wild-card chase.

Rojas had a pair of hits in his first big league game, including an RBI single in the seventh to make it 8-6. After his inaugural base hit in the sixth — just ahead of Ahmed's homer — the keepsake baseball was tossed into the dugout, where Eduardo Escobar playfully pretended to throw it into the crowd.

Rojas was acquired last month in the deal that sent right-hander Zack Greinke to Houston. Rojas became the 10th Arizona-born player to suit up for the Diamondbacks.

"Really nice approach. Unfazed. Good heartbeat. Not glossy-eyed. He looked very comfortable," Diamondbacks manager Torey Lovullo said. "To be relaxed, and do what he did today was very, very impressive."

Merrill Kelly (8-12) allowed four of his six runs in the first inning as he earned his first victory since June 12. Archie Bradley tossed a 1-2-3 ninth for his fourth save.

"I don't want to put an extra title on him," Lovullo said. "He's going to get the ball at the back end. He's in a good spot."

The Rockies jumped out to a 4-0 lead in the first after Raimel Tapia and Tony Wolters each delivered two-out, two-run singles. Kelly threw 29 pitches in the frame.

Trevor Story had two doubles and a solo homer for a Rockies squad that's gone 13-32 since June 21. It's the worst swoon by winning percentage in the National League over that time period and pretty much assured Colorado won't be making a third straight playoff appearance.

"It's tough. Knowing what our team's potential definitely makes it a little bit tougher," said Ryan McMahon, who had a solo homer in the fifth. "This is how we've been playing. It's on us. Nobody else to blame besides us."

Diamondbacks: OF David Peralta was out of the starting lineup with a stiff neck. He grounded out as a pinch-hitter in the sixth. ... RHP Luke Weaver (forearm tightness) will throw a 25-pitch bullpen session Tuesday. He had an MRI last week and "everything is progressing," Lovullo said. ... RHP Taijuan Walker (Tommy John surgery) threw out to 90 feet Monday.

Rockies: OF Yonathan Daza says he's feeling "good" after fouling a ball off his left ankle Sunday. He entered as a pinch-hitter in the sixth and flew out.

Rockies starter Peter Lambert was cruising along until the fourth inning when he struggled to find the strike zone. He walked the opening three batters before getting a 1-2-3 double play. Two pitches later, Ahmed brought in two runs with a double to deep center to make it 4-3.

Lambert finished with five walks, one intentional, over five innings. He gave up three runs.

"I allowed a lot of free baserunners and that's not what you're trying to do as a pitcher," Lambert lamented.