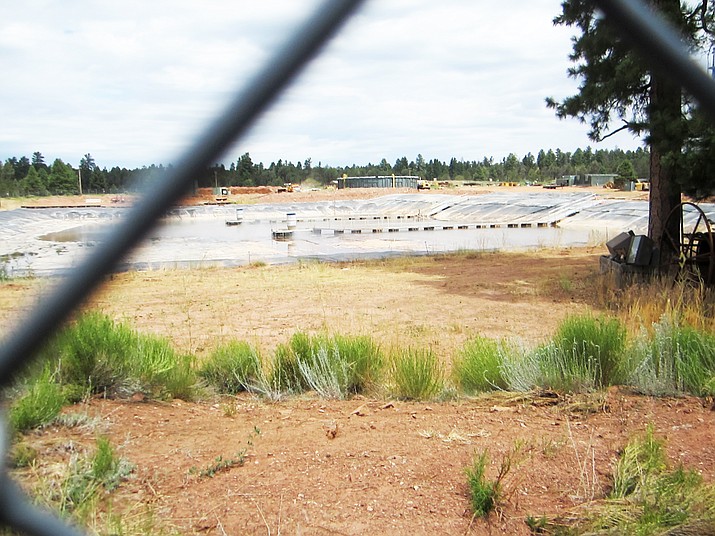 FLAGSTAFF, Ariz. — A group of young environmentalists are tracing the haul route of uranium ore from Canyon Mine to the White Mesa Mill near Bluff, Utah, while also meeting with indigenous leaders who are giving them a crash course in environmental action.

The project was created by the Grand Canyon Trust’s Youth Leadership Program. The project takes students on a journey following the route of uranium trucks through Navajo communities and up to the Ute Mountain community of White Mesa, the nearest neighbor of the mill where the ore will go for processing.

Students, ranging in age from 16 to 20, were on their second day of the week-long program as they toured Canyon Mine, which sits just outside Grand Canyon National Park, and listened as Sarana Riggs, Grand Canyon Trust program manager, talked about some of the history of Canyon Mine and the legacy of uranium on the Navajo Nation and other indigenous lands.

The week-long program is focused not just on bringing the student's attention to uranium issues on the Colorado Plateau, but also to showing them how to engage in direct action that will affect change.

Though her work, Riggs works on any issue pertaining to the Grand Canyon, either above or below the rim. Mostly, she works with different tribal nations that have a connection to Grand Canyon.

Grand Canyon Trust’s Youth Leadership Program takes young environmentalists on a journey tracing haul routes of uranium ore from Canyon Mine to the White Mesa Mill near Bluff, Utah. One stop on the journey took students to Red Butte, where they heard from Supai tribal members about the impacts of uranium mining in the area. (Katherine Locke/NHO)

One of those issues is trying to stop Canyon Mine from operating. The mine is about six miles southeast of Tusayan and Tusayan Ranger District of the Kaibab National Forest and is operated by Energy Fuels Resources.

One of the students asked Riggs if she had noticed any obvious changes to the environment around the area. Riggs said it would take more time to evaluate some of the changes.

“This is not like Chernobyl or Yakushima where the radiation levels are extremely high… she said. “We’re at a safe level. I wouldn’t take you guys here knowing that it wasn’t safe.”

Riggs said she does have monitoring equipment to ensure that levels aren’t rising and to keep checking the radiation levels.

Riggs said when water dissipates from the shaft at the mine, the company will start mining again.

“But also, the thing that prevents them from mining at this point is that the uranium prices are not at the level that they were to sell it,” she said. “They are at a really, really low price right now. So that’s hindering their process here.”

Riggs also mentioned the current president and his administration’s thoughts on mining.

“His viewpoints on natural resources and extracting that and selling abroad, that has also impacted the idea here of mining,” Riggs said. “The idea is to increase mining here and increase mining all around Grand Canyon.”

Students also heard from Collen Kaska, from the Havasupai Tribe, at Red Butte, an area sacred to the Supai.

In fact, Kaska mentioned that Red Butte is named by the Supai in their language in their stories.

“It said that the people used to camp there and there are probably artifacts in that area as well,” Kaska said. “I need to remember it — that’s not just important for me, but for my people as well, because I’m sure they’ve forgotten about it, too.”

Kaska explained that the area around and including Red Butte is Forest Service land right now.

“But it’s our aboriginal territory,” Kaska said. “Since it’s been taken over for over 100 years or so by now, I guess. Within that time, my people have been restricted to come out to this area. Even before that, like 50 years ago, they had to get a permit to come out here… to pick up wood, or herbs or even just to walk around this area.”

Kaska said the Red Butte area holds significance for the Supai as it is their umbilical cord and their emergence into the area.

“It is Traditional Cultural Property (TCP) for our tribe,” Kaska said. “That was a long process. The TCP doesn’t really mean anything to me because it’s just a piece of paper. It’s just added protection for the area — meaning that if we have concerns about Red Butte or anything that goes around this area, that we should be notified.”

And to make sure students understood not just the significance of the area but how it tied in with their week-long program, Kaska said the biggest threat to her people is the uranium mine — Canyon Mine.

“That’s been going on for years, since the 80s, since I was young,” she said. “And I’m still here. But it’s a long drawn out process and it wears you out as you’re like, ‘When is this going to end? When is there an end date that I can see?’ Are they going to listen to us? All we want is protection for our waters.”

Kaska pointed out that at Red Butte and the surrounding area, there is no water source and when the tribe used the area they had to bring their food, water and clothing — but, she said, most of that could be found if you look closely enough.

“But the water is the main source that we need,” Kaska said. “When you look around, you don’t see a lake, you don’t see rivers or puddles, really. Just those earthen tanks that are around for cattle, livestock and animals.”

The Supai have been told that their water in the village comes from the Red Butte area, Williams and Flagstaff — on the plateau.

“We’ve been told that for years and years,” Kaska said. “It’s a good thing because now we can say that the uranium mine is affecting the water. That’s what we’ve been telling everyone who will listen.”

Kaska said she doesn’t believe all the recipients of the water, whether it be her tribe, or other people who live in other states, know where their water comes from.

“I can just imagine the little ones now growing up saying, ‘Oh wow, this water will always be here. But that’s not the case if the water should get contaminated from here. It’s not just for my people that we’re worried about. It’s for everyone,” Kaska said.