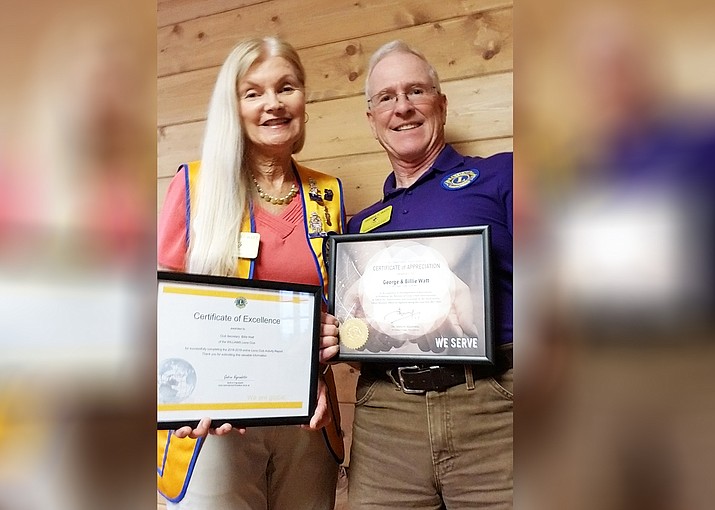 WILLIAMS, Ariz. — With the addition of two members, Williams Lions Club has grown by 22 percent, bringing total membership to 17.

In addition to an increase in membership, the club has received several international awards in the last year.

In 2018, Watt and his wife, Billie Jene, were recognized with an international award for their contributions to the organization and the Williams community. This is Watt’s fourth year as president of Williams Lions Club.

Also in 2018, the club received an excellence award from Lions Club International.

“Of the 26 clubs in this state section there were only four given out,” Watt said.

Williams Lions Club participates in several community projects which include the lighting of the Christmas tree on the hill each December, participating in the Parade of Lights, partnering with North Country Health Care for its health fair, hosting the Holiday Dinner and Toys for Kids (between 260-290 children received toys from the Lions Club in 2018), sponsoring Scout Troop 140, participating in the spring community clean-up day and hosting the annual Mountain Man Run, which takes place every Labor Day.

“We did 1,054 eye screenings last year, luckily they come in pairs (eyes), so it only took half as long,” Watt said. “Then we will buy glasses and eye exams for half a dozen kids.”

During the screenings, students' vision is tested to see if they need glasses.

“When you’re little you don’t know that you can’t see,” Watt said.

Watt said the highest number of students referred for glasses or further screenings was in Williams followed by Heritage and then Maine Consolidated.

“They go to see the doctor at that point, if they cannot afford it the Lions Club can help them out — to see a doctor and get eyeglasses,” Watt said.

For the last two years the club has borrowed vision screening equipment from the Lions Club Vision and Hearing office in Phoenix.

This year, the club hopes to raise enough money to purchase their own machine.

“It will be much nicer if we can have one of our own,” Watt said.

Future fundraisers for screening equipment includes the Mountain Man Run and sales from the annual community birthday calendars. The equipment, called a spot machine, costs around $8,000.

The Lions Club will offer vision tests again this year. Watt said they typically take place in October and are conducted at the schools. More information about joining Williams Lions Club or any future events is available from Watt at (480) 510-9420.