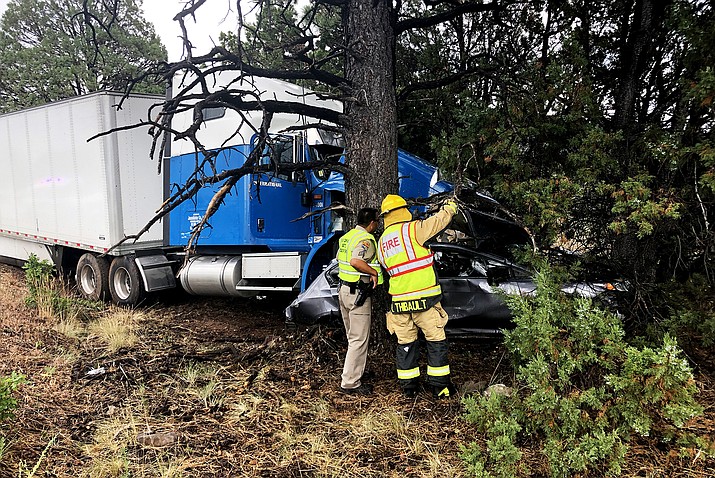 Williams firefighters assist law enforcement after a semi versus car accident on I-40 July 14. (Photo/WFD)

On July 4, WFD launched more than 1,400 shells for the Fourth of July firework show. WFD coordinated with multiple agencies to make the show possible. The show was fired from Gonzales Lake and lasted approximately 37 minutes.

Williams Fire Department responded to a semi-truck that rolled down the hill at Love's gas station July 31. (photo/WFD)

WFD is gathering information from third party billing agencies for fire department cost recovery services. Fire Chief Kevin Schulte will present this information to the city council in the near future.

WFD is working on a site plan for a fire station and training facility on the Sweet Water Well property. The water sales at Seventh Street and

Railroad, and Sweet Water are city owned properties and could work for future fire station locations. WFD is in need of newer stations that meet industry standards. The department is currently limited to any growth at its current locations.

WFD is looking into moving its repeater on Bill Williams to another tower due to bleed over from other frequencies. The department may also inquire with the Forest Service about the possibility of putting a repeater on the shooting range hill near Kaibab Lake. This would provide a better coverage area than the current location on the water tanks.

On July 2, WFD responded to a single vehicle, single patient accident on I-40. Fire personnel assisted with auto evaluation and electrical stabilization.

On July 6, WFD was dispatched for report of a fuel leak from truck at Love's. Canceled while en-route.

On July 12, WFD was dispatched for an overturned semi on I-40. Canceled prior to departure.

On July 13, WFD was dispatched for a vehicle fire on I-40. Canceled, no fire on-scene.

On July 14, WFD responded to a multi-vehicle accident on I-40 in which a semi had ran over a Honda car from behind. One occupant was bleeding from hands after breaking windshield to aide in recovery of two occupants in car. Fire personnel began triage and bandaging of patient. LifeLine was not on-scene. Pulse was not found on one occupant. Driver was covered by top of Honda and semi front bumper was on top of driver’s side.

Traffic control was established at the scene to slow on-coming traffic on blind corner.

Fire personnel remained on-scene for wrecker to pull semi from off Honda and to extricate both vehicle occupants and two dogs. Fire personnel cut A, B and D posts, popped passenger door to roll off roof to rear of car. Towing service winched the roof and pulled driver’s side seat to allow access for driver to be removed.

On July 17, WFD responded to report of a brush fire from Junipine Fire, requesting mutual aid. Upon arrival advised fire was a trash fire with no additional threats.

On July 17, WFD responded to report of CO alarm beeping at RV park. Initial report, all occupants out of unit. Used monitor to take air samples from all locations in and out of RV. No elevated levels were detected.

On July 17, WFD was dispatched to LifeLine Ambulance Substation for a report of smell of smoke inside the building with a visual haze throughout. Crews entered the building with entry tools, water can and thermal imaging camera to locate the source and investigated. Entry was made into the attic space where the furnace blower motor appeared to be broken with springs and screws fallen out.

On July 21, WFD was dispatched for a commercial assignment showing a smoke detector activation in the electrical room. All areas were inspected and showed no hazards.

On July 25,WFD responded to a burning tree about 50 yards off I-40. Pulled reel hose and used dry caffs to put fire out. Hand tools were used to dig up area in search of hot spots.

On July 26, WFD responded to two alarms at the Ramada Inn.

On July 26, WFD was dispatched for report of a smoke alarm going off in the kitchen/office.

On July 30, WFD arrived on scene to a diesel fuel spill at Loves truck stop. Report of tractor trailer with cracked fuel tank. Arrived to find tractor on back side of tire shop still leaking fuel. A tank syphon was used to start draining main tank while fire personnel and containment crew maintained a safe and confined spill area.

On July 31, WFD responded to a Semi tractor at Love's that had rolled from fuel station. The cab had jumped the curb above RV Park and was found hanging on a downward slope. Difficult extraction due to soft dirt footing.

On July 27, Loretta Yerian passed her Fire I and II exam. Sandoval started the in-house training for Yerian in May.

WFD will conduct extrication training and try out battery operated cutters and spreaders on Aug. 17. This training will show the capabilities and comforts of electric vs. hydraulic equipment.