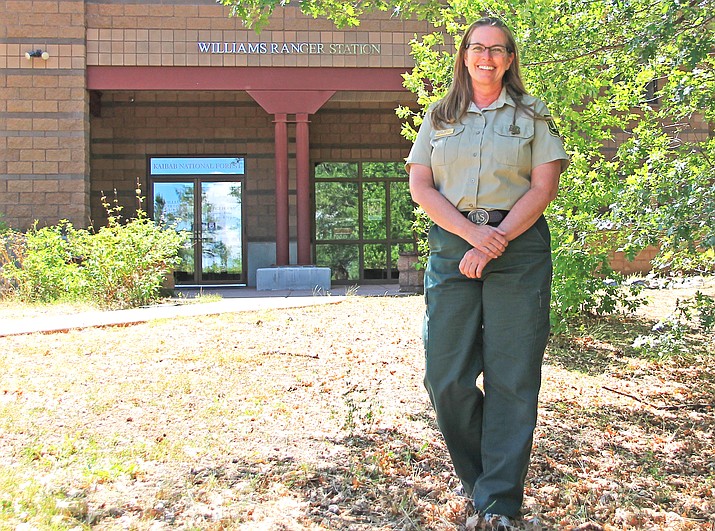 Debra Mollet has been selected as the new District Ranger for the Williams and Tusayan Ranger Districts in Kaibab National Forest. (Wendy Howell/WGCN)

TUSAYAN, Ariz. — The new district ranger for the Williams and Tusayan Ranger Districts was looking to use her forestry and engineering background in a collaborative way when she was offered the position at Kaibab National Forest.

“I’m not your introverted engineer type. I like working with people on projects and working in all the different resource areas,” said Debra Mollet, who is just settling into her new office at the Clover Ranger Station.

As district ranger, Mollet will work with staff to manage the 887,543 acres of the South District of Kaibab National Forest.

She will oversee everything from logging and prescribed fire to recreation, grazing and other forest uses.

Mollet comes to the Kaibab with significant experience in forest management and most recently served as the Deputy District Ranger for the Flagstaff Ranger District of Coconino National Forest, where she worked on the Flagstaff Watershed Protection Project and other forest restoration projects.

Mollet developed a love for northern Arizona as a child when her family would leave Phoenix and drive north to camp in the cool pines. She said generations of her family have been involved with farming.

“My parents are the first generation to come off the family farm and move west,” she said. “We were always super connected to the land.”

“I loved my time (as a firefighter), but it felt like I was being drawn to other things so I went back to school for engineering,” she said.

After earning her engineering degree, Mollet worked the next 10 years for an international engineering and architectural firm when she met an engineer with the Forest Service through a Toastmaster’s group.

Mollet was hired as an engineer for Coronado National Forest in Tucson and then later at Rio Grande National Forest in southern Colorado, where she was involved with road maintenance and construction projects, water and waste water systems and other facilities projects.

“Any of the engineering infrastructure that is associated with running the forest,” Mollet said.

Mollet said she enjoyed working on engineering projects, but found herself drawn to management.

“All my time spent on the private side with the architectural and engineering firm was all about managing people and making projects happen — teams of architects and archeologists and wildlife biologists making a project go,” she said. “I really enjoy the collaborative, everybody working together for the common goal thing, so this job with the Forest Service is a good fit.”

Mollet has spent the past few weeks getting to know the staff and issues on the Kaibab and Tusayan Districts.

“I think the big one is Bill Williams Mountain and looking at what we can do there to reduce fire risk,” she said. “There’s a tremendous amount of work that’s been done already, I’m getting up to speed on that — where we are in the process, where it’s going and how I can work with the city, county and others to make that a reality.”

Mollet said the Tusayan District has its own specific needs that differ from Williams.

“In Tusayan it’s the Ten-X Campground expansion and our relationship with the park,” she said. “Understanding the sheer volume of recreation that occurs and how to support that.”

Mollet said managing recreational use in Williams and Tusayan is challenging because of the diversity of forest users. She said not only is there a large influx from the Phoenix-metro area, but also a large international base.

“It is fantastic because people are associating with nature, I don’t want people to get so removed from it they don’t care for it anymore,” she said. “But it’s just the sheer number can have such an impact. That’s what the Ten-X expansion should help with.”

Mollet said she has been impressed with the staff at Kaibab National Forest and looks forward to working with staff on the numerous projects.

“It’s amazing to work with them because every one of them has a tie to this land,” she said. “No matter what you are working on, you have this common connection and it just makes it so much fun to come to work.”