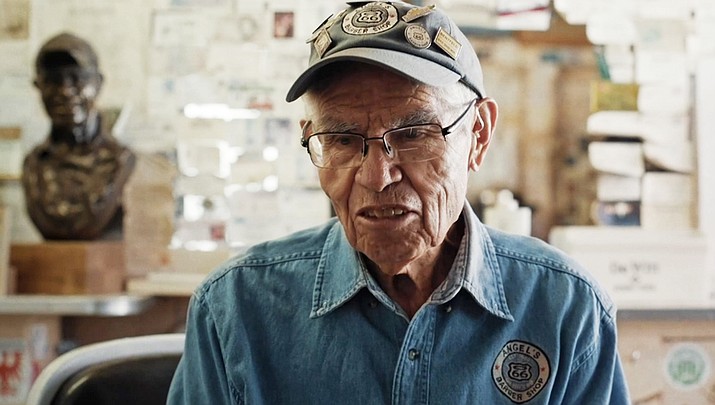 The feature film is a journey through the almost ghost towns of what once was the Main Street of America — Route 66. It is in English with Spanish sub-titles.

Three men; three paradigms, each in its own style, of a way of understanding the world in danger of extinction. A way of being in reality marked by character, self-confidence and determination to work for what you love and what you believe in.

And that is what ‘Almost Ghosts’ is about — Delgadillo, the barber of Seligman, fought 10 years to force the government to make historic the alignment from his little town of Seligman to the neighboring town of Kingman, without knowing that they were creating the very first Route 66 Association in the U.S.

After the Mother Road was decommissioned in 1985, Russell said he saw about three people a year for the next fourteen years walk into his place — the family business on Erick’s Route 66 historic alignment in Oklahoma. And Lowell Davis bought and restored the abandoned buildings of his hometown in Little Red Oak, Missouri just to try to preserve the memory and way of life. Lowell has restored the town in a new Red Oak II, several miles from Carthage, Missouri.

“I wasn’t going to build a town or anything, but I started buying buildings and it went larger,” Davis states in the film.

So large, Red Oak II now has its own vintage Marshal’s office, a gas station, a town hall and even a cemetery, all restored by Davis.

“Harley, Angel and Lowell are the voices of a whole generation that fought to keep alive Route 66’s memory and that still fights to preserve the American way of life” explains Ana Ramubio, director and writer for the project. “It is a documentary about Route 66, but it especially is a documentary about the people. They are the generation of the Grapes of Wrath, the ones who saw thousands and thousands of Americans travel the country searching for a better life in California, or the ones who traveled it.”

The Spanish filmmaker traveled to Tucson, Arizona, to premiere the film in the U.S. at the Arizona International Film Festival, where the film won the Best Documentary Award.

“The premiere was held in the historic Screening Room in Tucson, Arizona, which was a punk club in the 80s and is now a vintage independent movie theater, and when I was there everything clicked. Almost Ghosts would only be screened in that kind of historic places, landmarks that make the film merge with the environment, turning it into a nostalgic experience. Because ‘Almost Ghosts’ is all about nostalgia,” Ramubio said.

Every screening will be held in historic movie theaters along Historic Route 66.

The first screening will be held Sept. 12 at the Orpheum Theater in Flagstaff. More information is available at https://almostghosts.com or on Facebook at https://www.facebook.com/almostghostsdoc/.