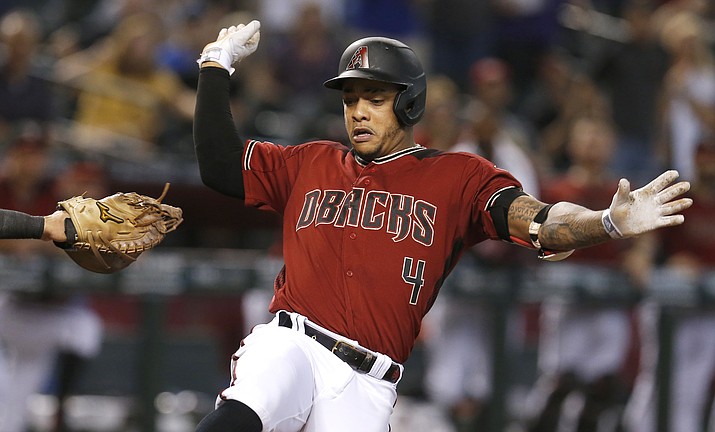 PHOENIX (AP) — Ketel Marte, an All-Star for the first time in his career, continues to put on a show for Diamondbacks fans.

His inside-the-park home run was part of a three-hit Sunday afternoon as Arizona beat the Washington Nationals 7-5.

Adam Jones had a season-high four RBIs, including a tiebreaking single in the seventh inning with two outs, and Archie Bradley pitched two scoreless innings for his second save as Arizona moved to 2 1/2 games out of the second National League wild-card spot.

It's held by the Nationals and the Philadelphia Phillies, who come to town for a three-game series that starts Monday.

Marte's third-inning line drive got by diving center fielder Gerardo Parra and rolled to the wall, near the 413-foot mark in left-center. Marte beat a high throw to home plate, eluding the tag by catcher Yan Gomes, for a solo homer and a 4-2 lead.

It was the 17th inside-the-park home run in club history and second this season.

Marte said he could feel the crowd rise as he rounded third base.

"I'm always focused on looking at Tony (Perezchica, third base coach," Marte said in Spanish. "Thank God he sent me and I made it. We did the little things and scored runs when we had our chances."

Arizona had trailed 2-0 on Parra's two-run homer in the second off Taylor Clarke. Brian Dozier also homered for the Nationals, his 16th of the season.

Washington has lost four of five.

Jones broke a 5-all tie with his two-run single off Wander Suero (3-6). He also doubled twice.

"Finally I was able to come through for my guys," Jones said. "If you get a pitch up in the zone, it's easier to hit. It's no secret, it's just going out there and just grinding."

Washington had tied it in the top of the seventh when Trea Turner, who singled and took second on a sacrifice, made it home just ahead of the throw from left field on Anthony Rendon's hit.

Yoshihisa Hirano (4-5) struck out two in that inning and earned the win in relief.

"We battled back. We just couldn't get that shut down inning," Nationals manager Dave Martinez said.

Jones doubled in a run and Nick Ahmed added a two-run double in the Diamondbacks' three-run second inning off Corbin, who left the Diamondbacks last offseason and signed with the Nationals for six years and $140 million.

Corbin lasted 5 1-3 innings and allowed five runs on seven hits with three walks and five strikeouts, receiving a smattering of applause from Diamondbacks fans as he departed.

"Just kind of never got into a rhythm out there. They had some good at-bats. Obviously they have seen me, I have seen them," Corbin said. "Just never really executed pitches as well as I have so just throw this one away and move on."

Bradley got defensive help from third baseman Eduardo Escobar's dive into foul territory to catch a line drive by Rendon for the second out of the ninth.

"It was a great read," Diamondbacks manager Torey Lovullo said. "He's baseball's little secret. Everybody inside of baseball knows what he's doing."

The Nationals have signed former Mets infielder T.J. Rivera to a minor league contract. Rivera got an at-bat as a pinch-hitter for Double-A Harrisburg on Sunday.

The Diamondbacks didn't announce a roster move immediately after the game, but right-handed reliever Zack Godley was in the clubhouse saying goodbyes to teammates.

Godley has 6.39 ERA in 27 games, including nine starts. He gave up three runs on four hits in 2 2/2 innings in his most recent outing Saturday and walked three.

Nationals: LHP Roenis Elias, who strained his right hamstring running out a groundball Friday night, was placed on the 10-day injured list. RHP Javy Guerra, outrighted to the minor leagues Saturday night, was recalled from Triple-A Fresno Sunday. ... INF Howie Kendrick (left hamstring strain) was placed on the 10-day injured list, and OF Andrew Stevenson was called from Double-A Harrisburg. Stevenson singled as a pinch-hitter in the eighth.

Diamondbacks: Marte fouled a ball off his right foot in the seventh inning and hobbled around for a few moments while being checked by a trainer. He remained in the game and singled up the middle in the at-bat for his third hit of the game.