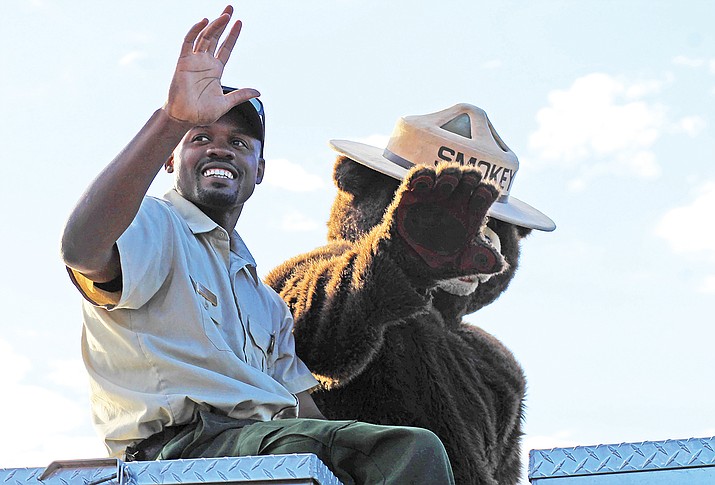 WILLIAMS, Ariz. — Smokey Bear, a staple at many Williams events and the symbol of a national fire-safety campaign, isn’t slowing down in his old age and plans to celebrate his birthday in style August 9.

Visitors and residents are encouraged to join Smokey for a birthday bash at the Williams Visitor Center that will include youth activities, giveaways, photo ops and fire engine apparatus demonstrations. The event will culminate with a tree planting ceremony.

Representatives from Kaibab National Forest will also be at the event with a wildland fire engine and messages about fire prevention, property protection and camping etiquette.

“Smokey Bear will make appearances throughout the day and interact with everyone present,” said Bob Blasi, Fire Information Officer for Kaibab National Forest.

Blasi said Kaibab National Forest proudly uses Smokey Bear to continue to educate and protect all public lands, including the forests around Williams.

“Smokey’s message is as relevant and urgent today as it was in 1944,” Blasi said.

People still cause most wildfire ignitions

Despite the campaign’s success over the years, wildfire prevention remains one of the most critical issues affecting the country, Blasi said.

“Although we can receive over one hundred lightning caused fire starts annually across our forest, it is usually the human caused fires that are the most dangerous for us to manage,” he said.

According to the National Interagency Fire Center, humans cause an average of 61,375 fires each year. The southwestern states average 3,761 human-caused fires each year that burn about 330,091 acres.

Over the past 10 years, people have witnessed the country’s new mega-fires, which have burned large swaths of land destroying nearly everything in their paths. The CU researchers found fires in 2018 were 30 percent larger than average over the past decade, and the massive fires are not just a part of nature.

In the fall of 2018, California experienced two of the state’s most catastrophic wildfires. The Carr Fire burned nearly 230,000 acres, wiped-out 1,077 homes and killed three fire fighters and five residents. The fire cost over $1.7 billion in damages and suppression costs. The cause of the fire was a trailer tire blow-out that caused sparks.

Just two months later, the Camp Fire burned 153,336 acres, burned 18,804 structures and caused 85 deaths. The fire damage was estimated at $16.5 billion. The cause of the fire was electrical powerline failures during wind.

In Arizona, the 2010 Schultz Fire near Flagstaff burned 15,000 acres and led to massive flooding that claimed the life of a 12-year old girl. The fire was caused by an abandoned campfire.

In 2011, the Wallow Fire near Alpine, Arizona burned 538,049 acres and to date is Arizona’s largest wildfire. The fire cause was mismanagement of a campfire. Firefighting efforts cost more than $79 million. The blaze destroyed 32 homes and four rental cabins, and at one point, nearly 10,000 people were forced to evacuate.

Despite a large portion of Arizona covered in desert, Arizona is ranked in the top 10 states for the highest number of wildfires in 2018, with 2,000 fires.

“Our forest here, like many, are fire adapted ecosystems and do require regular intervals of fire on the landscape to maintain vibrant forest health and protection of our mountains and watersheds,” Blasi said. “However, it is the unwanted human caused fires that are usually the largest and most destructive.”

Blasi said wildfire prevention education is an important tool in mitigating human-caused fires, and the Smokey Bear campaign has been one of the best methods.

“Smokey knows that education of our youth is the best way to prepare our next generation to understand the importance of fire prevention,” he said.

Festivities at the Williams Visitor Center for Smokey Bear’s 75th birthday run from 8 a.m. to 5 p.m. August 9. Visitors can partake in cupcakes, special door prizes, balloons and a special exhibit featuring nostalgic Smokey Bear memorabilia. The tree planting will take place at 1 p.m. where city council members, community and members and visitors are invited to partake. More information about the event can be found by calling (928) 635-1418.