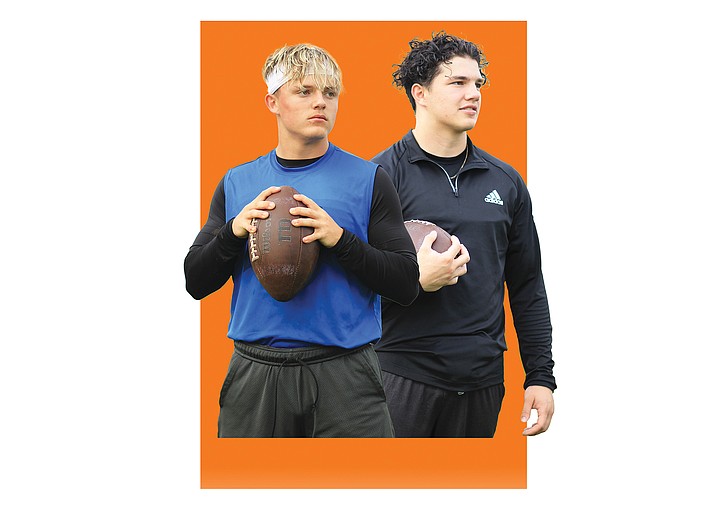 Williams coaches are looking to their experienced players such as quarterback Kolby Payne (left) and running back Chance Pearson to lead the Vikings to another state championship game in 2019. (Wendy Howell/photos/graphic)

WILLIAMS, Ariz. — The story of the 2018 Vikings began with a wave of optimism for a return to the state championship game, yet the season came to an abrupt end as injuries beset the team, which struggled to just make it through the quarterfinal game.

“We had aspirations, really,” said Head Coach Jeff Brownlee, “We were 9-0 and feeling real good about ourselves.”

After going undefeated throughout the season, the Vikings streak ended with a 30-6 loss to the Hayden Lobos in the state semifinals. After suffering injuries to over half of its starters, the Vikings entered the game with several determined, albeit less experienced players to carry the team.

“Going into the playoffs, we felt really good about ourselves,” Brownlee said. “We were still ranked number one — the kids were just thriving at that time.”

With the disappointing 2018 season in the rearview mirror, the Vikings have regrouped and are stronger than ever, Brownlee said.

Coach Jeff Brownlee works with the Vikings during their first week of practice. (Wendy Howell/wGCN)

“They kids are very excited for the season,” Brownlee said. “They realize there is unfinished business.”

Brownlee said the 2019 Vikings are coming into the season with experience and depth. Of the 12 core group players, nine are experienced seniors.

“This year we are very senior heavy, very senior driven and have good senior leadership,” he said.

“We feel that we can be an A+ team on all three phases of the game — offense, defense and special teams,” Brownlee said.

The Vikings came into the season already in shape with extensive knowledge of the plays, Brownlee said. He said the coaching staff believes this team is coming in better prepared than any other team they have coached.

“The kids went to several camps, lifted at the weight room and attended passing league — that just puts us further ahead,” he said. “They know the playbook, they know what is asked of them and they are ready to go.”

The Vikings are looking for good competition from last year’s championship team, Superior, and other teams such as Mogollon, Bagdad and Hayden.

“We need to fine tune things in the next couple weeks and be ready to go against that first game with Anthem Prep,” Brownlee said. “We have a good program with a culture of a good work ethic, we’re doing very well.”

The Vikings play a scrimmage with Mojave Accelerated at 6 p.m. Aug. 16 at home and have their first game with Anthem Prep at 7 p.m. Aug. 23 at home.