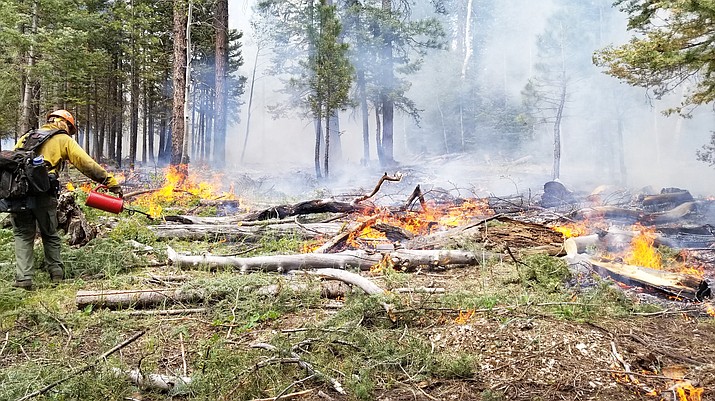 FREDONIA, Ariz. – The eastern half of the Castle Fire experienced its first significant rainfall yesterday morning. While the western side of the fire received little to no rain, cooler temperatures coupled with increased humidity significantly moderated fire behavior.

These conditions resulted in no new fire growth and the fire remains at 10,400 acres after moving across about 55 percent of the planning area. Firefighters adjusted to the change in weather conditions and redirected their efforts to rehabilitation work in the areas previously affected by the fire.

Along the western perimeter, specialized work continues where masticators are being used to redistribute ladder fuels to the forest floor. When the fire approaches, it generally burns through the debris efficiently while promoting a healthy ground cover that is more receptive to new growth and regeneration.

The forecast calls for showers and thunderstorms over the fire site through Thursday evening. Then daytime temperatures will begin to rebound as relative humidity decreases.

Even through several days of varying amounts of precipitation, the fire can remain active, especially in areas of heavy or dense fuel loads. Should a cycle of warm weather re-establish itself in the following days, the fire may regain momentum and continue its movement toward the western edge of the planning area.

The fire's origin is located about 11 miles south of Jacob Lake, three miles west of Highway 67, and just east of Forest Road 761 near Oquer Canyon.

The Castle Fire started in the right place at the right time and under favorable conditions, which provided a unique opportunity for fire managers to allow the fire to burn naturally within the planning area.

A temporary Closure Order is in effect for the Castle Fire area. It poses no danger to structures or other local infrastructure. Smoke is expected to be visible from both the north and south rims of Grand Canyon National Park, Jacob Lake, Highway 67, Highway 89A and Fredonia.

Wildland fire crews plan to continue improving roads and other designated perimeters within which the fire can move. Current weather conditions may influence the use of firing operations which may be conducted as needed in order to strengthen control lines. A Temporary Flight Restriction (TFR) is in place over the fire area.