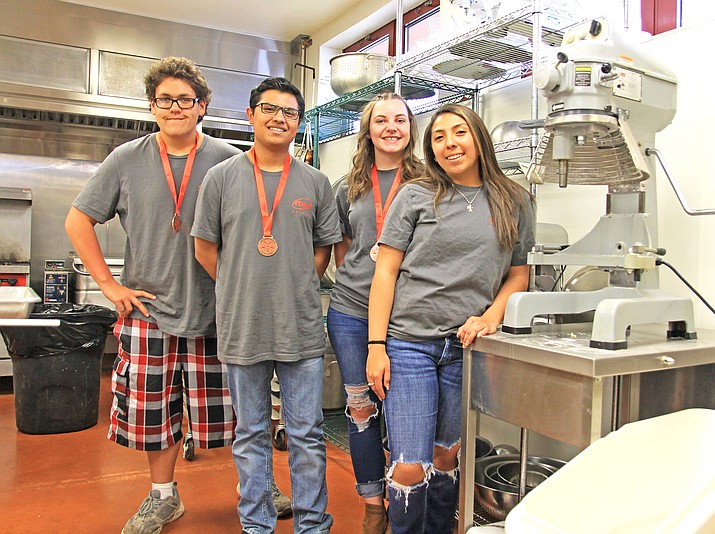 Jimi Gonzalez, Salvador Rosas, Jamie Donovan and Emily Ramirez competed at the Family Community and Careers of America cooking competion. Below: The students displayed their culinary skills at the competition held in Tucson. (Wendy Howell/WGCN)

Jamie Donovan, Emily Ramirez, Salvador Rosas and Jimi Gonzalez took their cooking skills to Tucson to compete with dozens of other schools for top honors. 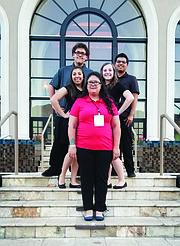 Donovan, Rosas and Gonzalez placed third in the Culinary Star Event in which they made a chicken dish with green beans, rice pilaf, Caesar salad and chocolate cake within one hour and 45 minutes. The students even made the salad dressing, croutons, raspberry sauce and whipped cream from scratch.

“The only item we cooked ahead of time was the Chicken Voila sauce,” Rosas said.

The students practiced the recipe for the three weeks prior to the event.

This is the first year the WHS students have participated in the event since Moreno stepped into the culinary teacher position in 2017.

Students were given a chance to enter a variety of competitions, but just chose two this time.

“They gave us a list of the categories for this specific conference,” Donovan said. “There was stuff like salad preparation, chicken fabrication, it was very organized with set times.”

Ramirez chose to enter the cupcake decoration competition were she placed third out of 72 entrants.

“I cooked my cupcakes ahead time and made my frosting and my fondant too,” she said.

Ramirez said she had an hour and fifteen minutes to decorate the cupcakes in any comic book theme of her choosing. She chose Thor and Ironman.

“I practiced her for a good two weeks,” she said. “During the competition I only finished 11 and I forgot my white fondant, but I improvised.”

All of the WHS students have experience with cooking and working in restaurants in Williams, and Donovan plans to attend culinary school to become a pastry chef when she graduates in May.

Ramirez works at Canyonlands Restaurant at Bearizona, Rosas works at Pine Country restaurant and Gonzalez has worked at a variety of restaurants, but none currently.

The students hope to return next year and enter more categories, but are pleased with their placement in this year’s competition.