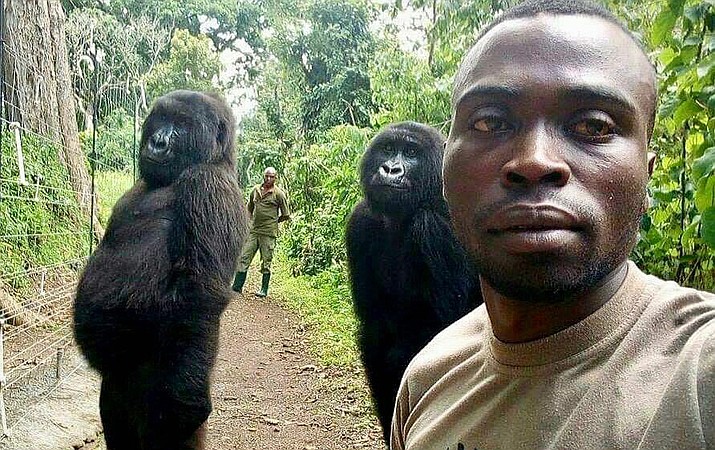 Mathieu Shamavu, a ranger and caretaker at the Senkwekwe Center for Orphaned Mountain Gorillas, poses for a photo at the the Senkwekwe Center for Orphaned Mountain Gorillas in Virunga National Park, eastern Congo. Shamavu said he was checking his phone when he noticed two female orphaned gorillas, Ndakazi and Ndeze, mimicking his movements, so he took a picture with them. (Mathieu Shamavu/Virunga National Park via AP)

LONDON — A park ranger in Congo has described how he captured a selfie with two gorillas that went viral.

Mathieu Shamavu, a ranger at Virunga National Park in eastern Congo, said he was checking his phone when he noticed two female orphaned gorillas, Ndakazi and Ndeze, mimicking his movements, so he took a picture with them.

The gorillas look as if they’re posing for the camera and when Shamavu posted the picture on social media April 18 it quickly clocked up thousands of likes and comments.

According to rangers at the sanctuary, Ndakazi and Ndeze were orphaned 12 years ago when their families were killed by poachers.

They were the first orphans to be cared for at the center, which according to Virunga park’s management, is the only place in the world dedicated to the care of orphaned mountain gorillas.

As the gorillas arrive in the sanctuary at a young age, they learn from their caretakers, Shamavu said.

“In terms of behavior, they like to mimic everything that is happening (around them), everything we do,” Shamavu told The Associated Press.

He said the caretakers at Senkwekwe Mountain Gorilla Orphanage Center try to give the animals as much access as possible to their natural environment, but they inevitably exhibit “almost the same behavior as humans.”

The orphans need constant care, so the rangers live nearby and spend their days with them — feeding them, playing with them, keeping them company.

“Gorilla caretakers with those gorilla orphans, we are the same family,” said Head Caretaker Andre Bauma.

He said without their own relatives nearby, the gorillas treat the rangers as their family.

“They know we are their mum. They are a member of the family. We are their friends,” Bauma said.

It’s also one of the last bastions of wild mountain gorilla populations. Parks in the mountains of Congo, Rwanda and Uganda have the last remaining mountain gorillas in their natural habitat.

Virunga’s management hopes the viral gorilla selfie will help boost the park’s profile, and encourage more people to contribute to the vital work of conserving the mountain gorillas and their unique natural habitat.