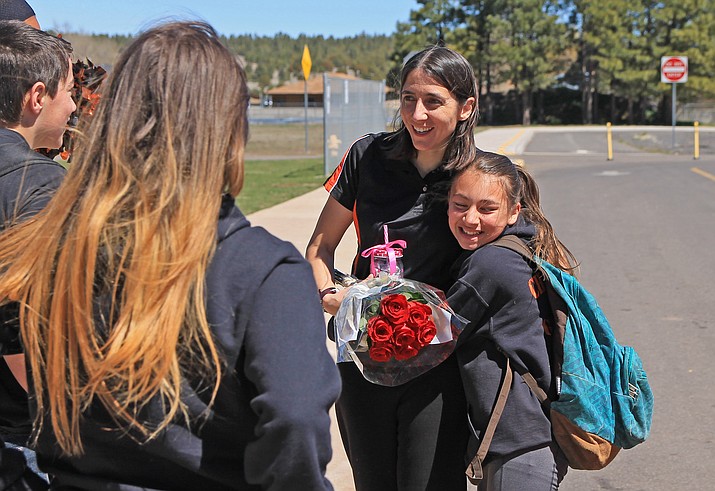 WUSD teacher Beverly Stearns is greeted by Reina Rocha and other students at Williams Elementary-Middle School April 18 following her selection as the 2019 Coconino County Teacher of the Year. (Wendy Howell/WGCN

WILLIAMS, Ariz. — About 400 students and staff lined the front walkway at Williams Elementary-Middle School April 18, holding signs and waving pom poms and streamers as they eagerly waited to greet their beloved teacher, Beverly Stearns, who was recently honored as the 2019 Coconino County Teacher of the Year.

Stearns, who teaches music classes from kindergarten through high school for the Williams Unified School District, walked away with the coveted award at a ceremony at High Country Conference Center in Flagstaff April 17.

Beverly Stearns marches with her students in the 2018 Homecoming parade. (Wendy Howell/WGCN)

“This is all kind of exhilarating and a little intimidating,” Stearns said about her award and the response from the community. “We do good things here at this school and this shows them.”

Stearns, Grand Canyon High School math teacher Brad Houston and Knoles Elementary fourth-grade teacher Lauren Likovich were the three finalists for the award. Stearns was given a cash award of $2,000, a truck to use for a year from Findlay Toyota and a special place in the Flagstaff Fourth of July Parade. She is also in the running for the 2019 Arizona Teacher of the Year.

“When Ms. Stearns began with our school district, the band program had not been functioning for quite a few years and music education was almost nonexistent,” said WEMS Principal Carissa Morrison in her nomination letter for Stearns. “She changed that, making the program one that the entire town takes pride in and supports.”

Morrison said Stearns achieved this through her high expectations, a tireless work ethic and her diverse talents, along with her sincere care and concern for students.

“Essentially, she teaches nine classes every day,” Morrison said. “She then often returns to the high school for marching or pep band practice.”

Morrison said she suggested Stearns adjust her schedule to reduce her workload, but she refused.

Students line up to greet teacher Beverly Stearns at Williams Elementary-Middle School April 18 following her selection as the 2019 Coconino County Teacher of the Year. (Wendy Howell/WGCN)

“It is just not her style to disappoint any student,” Morrison said.

A program on the mend

Stearns was hired in 2014 with the task of rebuilding a music program that had lain dormant for six years.

“I basically came in here and started from scratch — no one could play an instrument, no one could read music,” Stearns said.

Stearns said it was especially challenging the first year with the pressure for the revitalized band to perform at home football games.

“They did it though, the kids got through it,” she said. “It wasn’t pretty, but they did it.”

Stearns said each year since then has gotten better.

“This is the first year that I’ve had all levels that have started in the middle school,” she said.

Stearns said her position is unique compared to most music teachers. She teaches every age from five to 18 years old.

It was the music teachers and band directors of those schools that planted the seed for her future in music.

“Mr. Mann was my elementary band director,” Stearns said. “He brought in a bassoon, opened it up and said ‘you want to learn this?’

Stearns said Mann’s encouragement is what generated her interest in the bassoon, which she played through middle school and high school, and lead her to a full-tuition scholarship at Northern Arizona University.

“They just let me be me and it was cool,” she said.

With talented music teachers and supportive parents, Stearns continued her path into music at NAU, where she participated in numerous ensembles, the marching band, the concert band, the wind ensemble and the orchestra.

“That’s how I paid for college, it’s expensive now, but to my family it was very expensive,” she said.

With a bachelor’s degree in music education in hand, Stearns made the decision to raise a family and wait a few years before teaching.

“I chose to stay home with my kids until they were old enough to go to school,” she said. “So I could have been teaching for 20 years, but I don’t regret staying home with my kids at all because I got to play music with them and teach them. It was the right decision for us.”

A love of music

Stearns said she had several avenues to explore while in college, but chose music education as her focus.

She said the best thing about teaching multiple levels is watching students progress.

Stearns said she also enjoys giving her students a sense of belonging with music.

“It gives them a home, a safe place to be,” she said. “In sports you have your best players and everyone else will sit the bench. But in music you don’t get that option, especially in an ensemble our size — everybody is important.”

According to WUSD Superintendent Rick Honsinger, Stearns is well-deserving of the award.

“She represents all the great teachers, employees, students, and board members we have at WUSD,” said Honsinger. “We really do have a great school district and it’s nice to have that recognized in this fashion.”