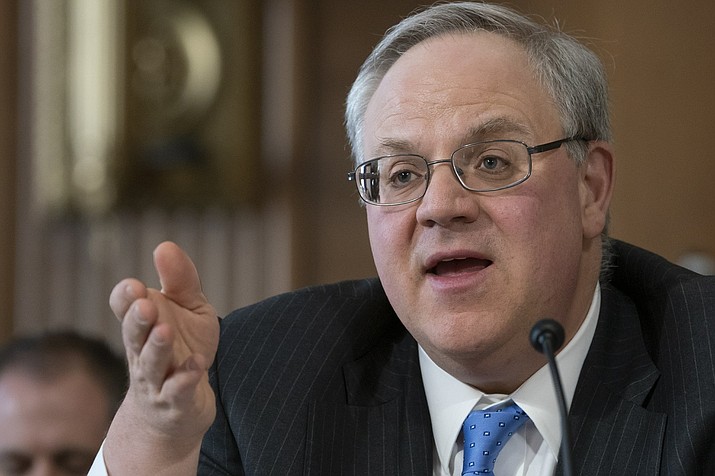 WASHINGTON -- The Senate on April 11 confirmed acting Interior Secretary David Bernhardt April 11 to lead the department on a permanent basis, despite complaints by Democrats that the former oil and gas lobbyist has used his federal position to benefit former industry clients.

Senators voted 56-41 to approve Bernhardt’s nomination to oversee more than 500 million acres of public lands and other resources, including national parks, monuments and wildlife refuges. He succeeds Ryan Zinke, who resigned in January amid a series of ethics investigations.

Bernhardt represented energy and agricultural interests until President Donald Trump picked him in April 2017 to be deputy secretary.

Bernhardt, who was confirmed to the No. 2 position in July 2017, says he has complied with all ethics laws and rules. But Democrats and environmental groups accuse him of using his federal post to shape regulations and legislation in favor of oil and gas interests and other former clients.

“The Zinke ethics hurricane was bad enough. America should not be harmed again by a Bernhardt ethical typhoon,” said Sen. Ron Wyden, D-Ore.

“The interior secretary is supposed to be running (the department) for the benefit of the public, not for special interests,” Wyden said.

Wyden and other Democrats said Bernhardt has taken actions to weaken the Endangered Species Act, including erosion of protections for a California fish species long targeted by a former client, the Westlands Water District, one of the largest and most politically powerful water utilities in the country.

Sen. Lisa Murkowski, an Alaska Republican who leads the Senate Energy and Natural Resources Committee, said Bernhardt, 49, has the experience and expertise needed to lead the department. The Colorado native worked at the Interior Department for eight years under President George W. Bush, including as the department’s top lawyer.

“He is from the West, he has great familiarity with the issues that will come before him and he has proven that he can ably lead the department,” Murkowski said. She said Bernhardt “has proven to be a strong partner not only for Alaska, but states all across the country.”

She linked ethics allegations against Bernhardt to unspecified, “pretty well-funded groups that are working very hard and very energetically against his nomination.”

Three Democrats — Sens. Martin Heinrich of New Mexico, Joe Manchin of West Virginia, and Kyrsten Sinema of Arizona — voted for Bernhardt, as did independent Sen. Angus King of Maine, who caucuses with Democrats.

Democrats and environmental groups also criticized Bernhardt for failing to stand up to Trump on his proposal to drastically expand offshore drilling along the East and West Coasts, including off the coast of Florida, where a moratorium on offshore drilling expires in 2022.

Florida Republican Sens. Marco Rubio and Rick Scott voted in favor of Bernhardt after receiving assurances from him and other administration officials that Florida would be excluded from drilling proposals.

Rubio said in a statement that the department cannot legally take Florida off the table until public comments are received. But, he said, “I am confident that when all is said and done the ban on oil drilling off of Florida’s coasts will remain in place.”

Senate Democratic leader Chuck Schumer of New York said Bernhardt’s refusal to rule out offshore drilling in Florida “should be a wake-up call to my colleagues all up and down the coasts — Atlantic, Pacific, Gulf,” that offshore drilling is a possibility despite bipartisan opposition.

“It is hard to imagine someone whose background is so at odds with the department’s mission as Mr. Bernhardt,” Schumer said. “President Trump, for all his talk of draining the swamp, wants to add yet another Washington swamp creature lobbyist to his cabinet.”

Kieran Suckling, executive director of the Arizona-based Center for Biological Diversity, said Bernhardt “will be even worse than Ryan Zinke.”

Bernhardt “has spent decades scheming to undercut protections for wildlife and public lands across the country,” Suckling said. His confirmation “puts him in the perfect position to turn those nightmarish dreams into reality.”

But Randall Luthi, president of the National Ocean Industries Association, said Bernhardt’s “unparalleled depth of experience and knowledge of energy and conservation policies will serve our nation’s public lands and resources well.”