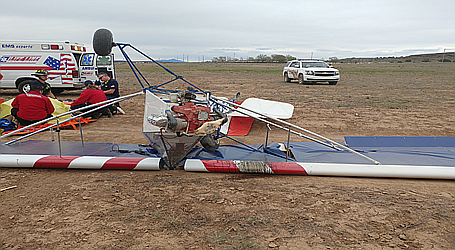 An ultralight aircraft built by a Dewey man and his son crashed in Paulden, injuring the sole occupant April 11. (Photo/Yavapai County Sheriff's Office)

PAULDEN, Ariz. — The pilot of a small aircraft was found conscious with broken bones after his homemade ultralight crashed in Paulden April 11.

A report of the crash came from a motorist driving on Highway 89 at about 2:30 p.m., according to the Yavapai County Sheriff’s Office (YCSO).

Responding YCSO deputies quickly found the wreckage in the field some distance behind the Paulden Fire Station.

The pilot, 51-year-old Kenneth Seebeck of Florida, was the sole occupant of the aircraft. He was stabilized and airlifted by medical helicopter to the Flagstaff Medical Center. His injuries are not considered life-threatening, YCSO reported.

Also at the scene was Kenneth’s father, 80-year-old George Seebeck of Dewey. George told deputies that he and his son had built the aircraft, which he described as being a homemade ultralight. George said he and his son had hauled the aircraft to the open area off Highway 89 for its first flight since being completed. He said the airplane went down within a minute or so after taking off.

The exact cause of the crash has yet to be determined, YCSO reported.