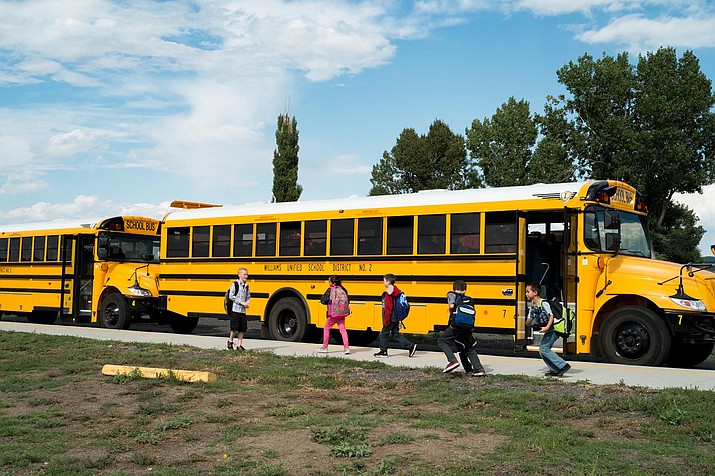 Williams Unified School District is one of 55 schools selected to receive a new school bus following a lawsuit settlement with Volkswagen. (Wendy Howell/WGCN)

After completing four waves of funding totaling $31.8 million for the purchase of 285 buses, Arizona had remaining funds available to allocate additional buses.

Ducey announced $5 million in additional funding for the purchase of 45 school buses for rural school districts and charter schools across Arizona.

Williams, Ash Fork and Maine Consolidated were chosen in this fifth wave of funding, receiving $110,000 each for buses.

According to WUSD Superintendent Rick Honsinger, the district will need to spend a little more than that to equip the buses with extras like air conditioning.

“We generally buy a bus every couple of years,” Honsinger said. “We try to keep buses for 10-year periods.”

Arizona chose to allocate the remaining funds for school buses to schools in rural counties, working directly with 13 rural county school superintendents. The state removed all requirements for receiving a bus except for those criteria required as part of the original settlement agreement and used a consistent application process to ascertain the needs of those rural districts. Many of the school districts receiving buses in the final allocation did not receive a bus during the first four waves.

“Investing in our K-12 schools remains a top priority,” Ducey said. “Arizona found an innovative way to use these settlement funds to invest in public education. The new school buses have gone a long way to benefit Arizona schools, especially those in low-income districts and rural communities. And with this last round of funding, every rural county in Arizona received at least one bus. Rural schools can use freed up funds to meet other capital needs.”

With the last wave of funding, Arizona has allocated a total of $36.8 million for the purchase of 330 school buses at 141 school districts and charter schools.

Honsinger said the donated bus will free up money the district can use for other things.

“We always have needs,” Honsinger said. “I feel WUSD is as deserving as any district to get one of these buses from this program.”

In January of 2016, the U.S. Department of Justice filed suit against Volkswagen for violating the Clean Air Act by modifying its vehicles to cheat emissions tests. The suit resulted in a settlement agreement that requires Volkswagen to spend $10 billion to buy back vehicles or compensate vehicle owners and $4.7 billion to offset pollution from the modified cars. Arizona will receive $57 million over the next two years. The plan also includes funding other mission critical projects such as supporting wildland fire crews and equipment for the Arizona Department of Transportation.