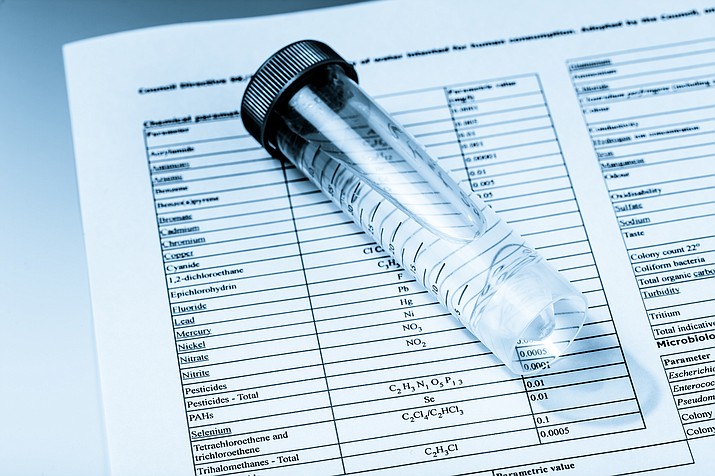 GRAND CANYON, Ariz. — Each year in the spring (March - June) Grand Canyon National Park experiences an increase in turbidity in the drinking water.

This increased turbidity is caused by snow melt and spring rains recharging the aquifer and the increased water flows through the rock formations to the point of supply for the Grand Canyon National Park Public Water Supply System.

As water flows through these rock formations, very small particles of inorganic material are dissolved from the rock and are held in suspension in the water.

This suspended inorganic material is too small to be removed by the centrifugal separation process used at Roaring Springs and remains in the potable water.

These particles of dissolved rock and minerals appear in the potable water as a slight tint or a noticeable cloudiness.

The extent of the turbidity is directly proportional to the amount of snow melt and rainwater that flows through the rock formations.

This annual turbidity event has been exhaustively researched and evaluated for the past 22 years by the National Park Service, independent laboratories, the US Public Health Service, and the Arizona Department of Environmental Quality.

The turbidity is caused by dissolved inorganic material such as silicates and calcium precipitates suspended in the water. The Roaring Springs Water Risk Assessment performed in August 1995 state the particles are from common sedimentary rock.

Although this turbidity can cause cloudiness in the potable water, it does not create a health risk to the public.

No organic materials have been identified during these investigations of the turbidity causes. Although this dissolved inorganic material causes the water to be slightly cloudy, the dissolved material is well below maximum contaminate levels established by the Environmental Protection Agency and is not harmful to health.

Turbidity has no health effects but can interfere with the disinfection processes practiced at Grand Canyon National Park and may provide a medium for microbial growth. For those reasons, we routinely increase the chlorine residual of the drinking water and increase our microbiological water sampling and testing throughout this spring period of increased turbidity to insure that the drinking water is adequately disinfected. The increased chlorine dosage and the enhanced microbiological monitoring and testing is maintained until the turbidity drops to the normal values of less than 1.0 NTU, usually by late June or early July.

Grand Canyon National Park operates a Public Water Supply System licensed and approved by the Environmental Protection Agency and by the Arizona Dept. of Environmental Quality. All potable water must meet those federal and state standards at all times.