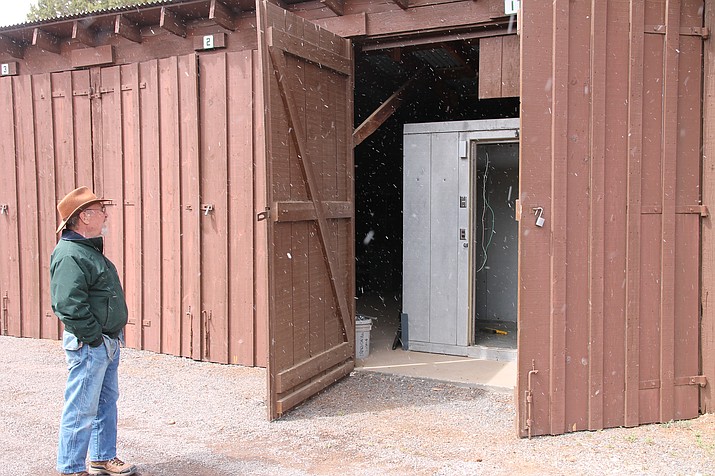 GRAND CANYON, Ariz. — If it wasn't for the sandwich board sign and the enthusiastic promotion by volunteers like Mike Scott, someone looking at 87 Sunset Drive might easily mistake it for a storage shed.

Step inside, and you'll find shelves stacked with canned goods and life's necessities, neatly laid out by volunteers to help community members in times of need.

The Grand Canyon Food Bank was conceived more than a year ago, but Scott said efforts really ramped up during the government shutdown. That's when it became more obvious, Scott said, that there were members in the community struggling on a daily basis. With the help of the Grand Canyon Rec Center, Scott was able to coordinate with St. Mary’s Food Bank, as well as local businesses like Xanterra and Delaware North, to set up an emergency food pantry for any community resident who was struggling while waiting on the promise of a paycheck.

“We actually handed out about 30,000 pounds of foodstuffs over a six-week period,” Scott said. “Although it was bad for the employees because it was so slow up here, I think it helped to make a bunch of other people aware that there really is a need for a food pantry here.”

Building on that motivation, Scott and other community stakeholders moved ahead with plans for a supplemental food pantry within the park. It has taken several months to complete a few processes, from choosing an appropriate location and working out the details with the National Park Service to finding storage and applying for the proper permits.

“Instead of losing all the momentum from the emergency food pantry, we decided we would open this and advertise through word of mouth,” he said. “We’ve started handing out a few fliers and recruiting volunteers.”

Scott also registered the program as a state and federal not-for-profit group, praising his wife’s skills as a retired CPA to complete all the necessary paperwork. Things were moving along, Scott said, until the government shutdown, which delayed the process another couple of months. 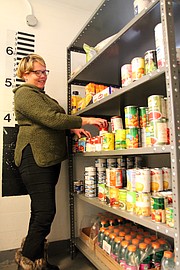 Finally, housed in a cinderblock building that used to serve as the park’s jail, the pantry opened its doors April 1. Community members residing in the Grand Canyon Unified School District can visit from 8 to 11 a.m. Mondays, 11 a.m. to 2 p.m. Wednesdays and 2 to 5 p.m. Saturdays for a selection of meats, produce and pantry staples. There are income guidelines, but Scott says residents can self-identify.

“We’re trying to supplement nutritional needs,” he said. “We’ve set it up so people can come here and get four or five pounds of food weekly. We can’t provide three meals a day, seven days a week.”

What makes this food pantry different from other food banks, Scott said, is that residents can shop for what they need as if it was a store. St. Mary’s does distribute 25-pound, pre-packed food boxes once a month in Tusayan, but Scott said those don’t always work for every resident, especially those who may live in dorms without access to a kitchen.

Megan Eversole, a park resident and at-large member of the food pantry’s board, said providing nutritional foods is important because it can be difficult to get and the expense is sometimes prohibitive.

“Depending on what your living situation is, you might not have a good way to cook food,” she said. “Groceries here can be expensive, too.”

Amy McMurry, inventory control manager for Delaware North, said she sees a big need in the community for the food pantry.

“You’ve got families with small kids, there are seasonal employees who don’t have a place to cook,” she said. “Then there’s the financial burden of it and trying to work that out here at the Canyon, especially with it being so transitory, and people are new to that aspect.”

Eversole added that even families who will be residing at Grand Canyon for more than a few months can need help from time to time.

“My husband is NPS and recently moved here about six months ago, and I worked at our last park,” she said. “Now we’re a one-income family because there aren’t opportunities here for me to work in my field.”

Partnering with local businesses and organizations has been key to the program’s development and success, Scott said. NPS, Xanterra, Delaware North and the town of Tusayan have been early and invested partners.

“A big part of this is let’s do this in a way that’s sustainable,” Scott said. “The more buy-in we get from the community, the better off it’s going to be.”

Park concessioners like Xanterra, Delaware North and Bright Angel Bikes were integral in donating to the emergency food bank during the shutdown, and Scott said he is looking forward to working with them to be able to provide items like pre-made salads or sandwiches that are still below the expiration date but have already been replaced on retail shelves.

Xanterra is also donating work time so electricians can help the volunteers get some electrical work up to code.

Scott’s motivation for helping the Grand Canyon, Tusayan and Valle communities began with a summer lunch program a year and a half ago. Local churches and a couple of community partners were able to provide sack lunches to children under the age of 18 three days a week in 2017. The following year, the lunches were provided every day, and the locations expanded to include Tusayan and Valle, as well as more locations within the park itself. The effort was staffed entirely by volunteers and the food was provided by St. Mary’s Food Bank. Businesses in Tusayan and Valle provided space.

Late last year, St. Mary’s announced Scott had been selected for the agency’s Hunger Heroes award, which he accepted at a banquet April 9. Looking at the plate with his name on it, Scott was quick to give credit to the community for stepping up to help each other.

“It has my name on it, but it belongs to the entire community,” he said.

Scott said the food pantry recently made the short list to be considered for a $10,000 grant to provide commercial refrigeration units.

Eventually — several years down the road — Scott hopes to relocate the food pantry to a larger location within the park, but right now, the focus is on getting the pantry primed at its current location and spreading the word.