Trophy bass caught in Lake Powell as season ramps up 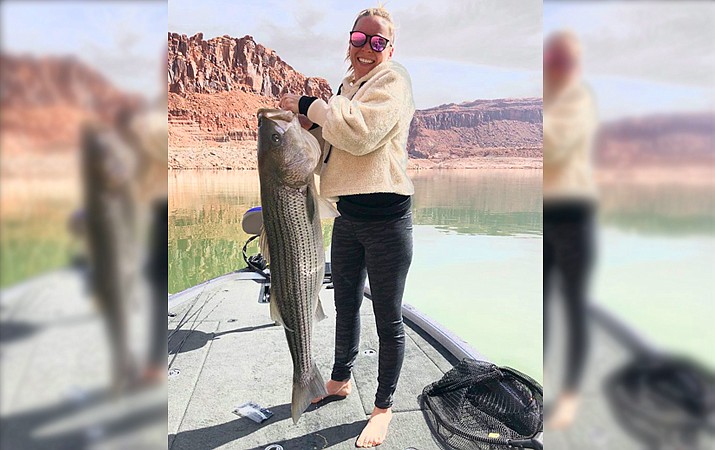 Heather Litke holds a trophy striped bass caught in Lake Powell March 26. The bass weighed over 35 pounds and was 44.5 inches long. The bass was released back into the lake moments later. (Photo/Wayne Gustaveson)

PAGE, Ariz. — Occasionally a big, trophy striper is caught. The timing is usually random, dependent on the right lure contacting the bottom at the same instant that the big fish is actively searching for food at the exact spot.

The number of trophy sized fish in Lake Powell is small compared to the length of the shoreline. The reason for this is the schooling behavior of striped bass. They feed as a team and work well together until food is scarce. If a large striper stays with the school it may not get enough food to grow to trophy size. If it heads out on its own, it has to change its foraging techniques to feeding on larger game fish including bass, walleye, carp and catfish.

The largest striper caught in Lake Powell weighed 48 pounds, 11 ounces in 1991. Since the 1990s, only 30-pound stripers have been caught. 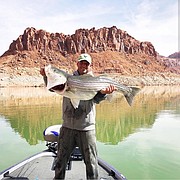 Ryan Litke and his wife Heather ran up the San Juan for a few days to fish for bass. They had success catching bass on the morning of March 25 and then fishing improved as the water warmed in the afternoon.

March 26 got off to a slow start until around 11:15 a.m. when Heather hooked a fish along the shore fishing a chatter bait.

“The fish was really pulling that it was strong," she said.

Ryan’s first thought was maybe she had false hooked a carp or a decent smallmouth or largemouth bass.

As she played the fish for a few minutes Ryan realized it might be a bigger fish, so he started to take more interest in what was happening. Needless to say, after fighting the fish for another 5-10 minutes, Ryan saw a flash and realized Heather had a good, if not great striper, and that is when he went into big fish mode and forgot everything else.

After a few more minutes of slowly working the fish to the boat, they decided the net wasn't going to work so they tired this big specimen out. When it rolled over near the boat, Ryan grabbed it by the mouth and yanked it over the side of the boat.

Everything from that point was a blur. Ryan remembered quickly measuring the length of the trophy fish at 44.5 inches and then placed it on the scale, where it weighed 35.33 lbs. They took some quick pictures and then released the giant striper in hopes that someone else will get to catch that fish again someday. Not bad for a woman who has only fished Lake Powell a handful of times. This will be a hard, personal best to beat.

The trophy fish swam away because: 1) the water temperature was cool (52-54F). 2) The big fish was hooked in 12 feet of water and did not go down to the depths, which can prevent a large fish from being successfully released. This was a great day for Ryan and Heather and also for the big fish that still swims in the San Juan arm of Lake Powell.