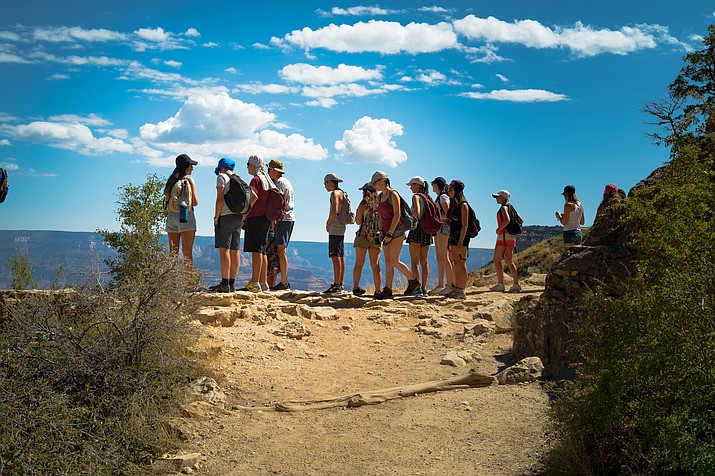 GRAND CANYON, Ariz. — For visitors to the Grand Canyon, sometimes the allure of inner canyon trails is part of the magic — looking further and further down and thinking “that doesn’t look very far at all.”

Anyone who has lived and worked in the Grand Canyon community can tell you, however, that it is indeed much further than it appears from the Canyon’s rim. Weather, preparedness and fitness all play a part in reaching those elusive inner Canyon vistas, and the park’s Preventative Search and Rescue (PSAR) crew is there to make sure visitors reach their destination or the rim safely.

Brandon Torres, branch chief of emergency services for the park, said the department is set to hire seven preventive search and rescue rangers this season, six on the South Rim and one on the North Rim. These rangers will patrol the major corridor trails — Bright Angel, South Kaibab and North Kaibab — to respond to calls regarding injured hikers.

Along the way, one of the most important aspects of their patrols is to make contact with visitors who aren’t in trouble yet, but may not realize the climb that lies ahead of them.

“People start (hiking) down and it’s easy to just keep going,” Torres said. “Sometimes the rangers are just there with a nudge to say ‘hey, have you thought about the hike back up?’”

Although talking to hikers is an important part of the job, PSAR rangers are also trained emergency medical technicians — it’s a requirement of the job. While on the trail, they may help hikers who are ill or have an injury, or who need to be evacuated immediately to a waiting ambulance.

Torres described a typical day for a PSAR ranger as covering the major trails and sometimes wilderness trails for about half the day, then trading off with a fellow ranger and manning the ambulance for the other half. If there’s an emergency, such as someone reported overdue or missing, they’ll also help with the search.

Torres said all PSAR rangers are trained in both helicopter operations and technical rescues and continue to receive ongoing EMT training. The experience they have at the park often translates into future medical careers.

“Our typical PSAR rangers are college-aged, looking for a seasonal job for the summer,” Torres said. “A lot of folks come though the programs that go on to become doctors. Typically they’re already interested in the medical field.” 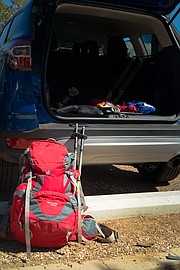 PSAR rangers are prepared for a variety of scenarios on the trail and should be able to carry a 45-pound pack three miles in 45 minutes. (Loretta Yerian/WGCN)

While hiking down the trails daily, about three miles, Torres said the rangers are well-prepared — they must pass a physical fitness test as part of the job.

The challenge, he said, are spur of the moment search incidents in the middle of summer or the middle of the night, both of which are frequent during the busiest summer months.

“If we have someone lost in the middle of June when the heat is really cranked up, it’s hard on the staff,” he said. “Or if they’ve just gone off shift and three hours later need to get up and go search.”

Even with the challenges, it’s evident the PSAR program is working well. Torres said the park was receiving about 500 calls per year during peak months from May to October before the program was put in place. Now that number is down to about 300.

Aside from the PSAR rangers, who will spend about 60 percent of their time on the major corridor trails and the rest on less-traveled routes, volunteers are an essential part of the programs’s success.

Volunteers aren’t required to have EMT training, but are well-versed in basic first-aid and CPR. Torres said a good portion of the volunteers are retired, and many come from other states or even countries to spend two to three weeks patrolling the trails.

Currently there are about 60 volunteers to complement the seven full-time rangers, and Torres said that number is limited to the number he says can be trained and managed effectively.

“The main concern is are we covering the trails and are there people down there,” he said. “We wouldn’t be able to provide quality experience and training with, say, 200 volunteers.”

Volunteers make contact with hikers who may be having difficulty, which can happen when they come unprepared for an inner canyon hike. Hikers often don’t carry as much water as they need, and forget to bring salty snacks or electrolyte drinks to prevent hypernatremia. Stopping to offer a package of Goldfish or a Gatorade packet to mix into water can prevent fatigue from becoming a health crisis on the trail.

Torres said search and rescue has been a great experience for the volunteers, and many return year after year.