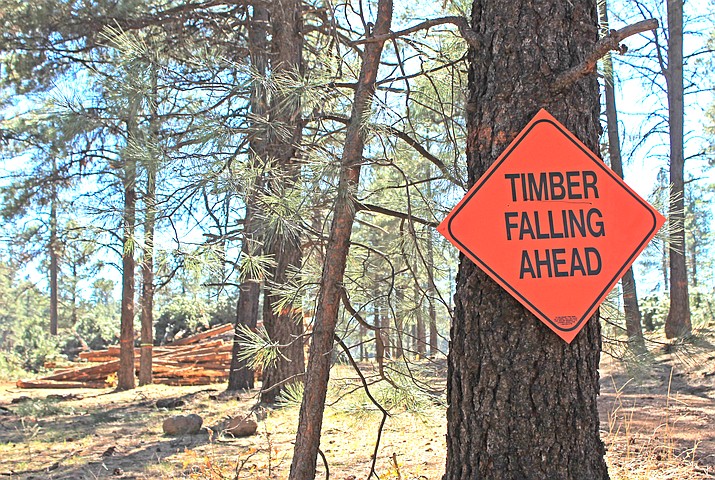 Loggers work to thin forests in northern Arizona. Many stakeholders are eagerly anticipating requests for proposals for Phase 2 of 4FRI. (Wendy Howell/WGCN)

The pressure is on the U.S. Forest Service to open up a second large-scale forest thinning contract in its efforts to restore the dense forests of northern Arizona through its Four-Forest Restoration Initiative (4FRI).

Although the request for proposals was slated for December 2017, forest officials announced they needed more time and have spent the past year gathering information from stakeholders and evaluating their hits and misses with the original large-scale contract issued to Good Earth Forest Products, LLC.

Arizona Sens. Kyrsten Sinema and Martha McSally recently urged the Forest Service to open up the Phase 2 request for proposals (RFP) for 4FRI.

“We do appreciate the support we are getting from the delegations,” said Jeremy Kruger, chief executive for 4FRI. “We have been meeting with them. They want to see us ramp it up and we want to ramp it up.”

According to 4FRI leaders, Phase 2 is under development and plans are to have a contract issued by the end of the calendar year. The contract is in its final stages of review and then a presolicitation notice will be posted for those in the industry.

Although forest officials declined to specify what acreage the Phase 2 contract will cover, it most likely will be similar in scale to the Phase 1 contract.

The Forest Service said they are working with the Bureau of Reclamation, Salt River Project, Arizona Commerce Authority and Arizona State Department of Forestry and Fire Management to collaboratively design the RFP that would invite proposals from private industry to perform mechanical thinning and related work within the 4FRI project area.

They are utilizing experts including foresters, those in the forest product industry, data and financial analysts, timber contracting officers, policy and acquisitions specialists and others on the development of the RFP.

The Phase 1 contract is the largest stewardship contract in the Forest Service’s history and has been plagued by financial and technical challenges since it was awarded in 2012.

The contract was awarded to Good Earth Power, which is owned by FEC Logging USA Holdings, LLC, with hopes of thinning 300,000 acres over 10 years. With a goal of 30,000 acres per year, the Phase I contractor has treated just 11,283 acres to date, including 1,562 acres last year, according to forest officials.

The 4FRI leaders acknowledge the struggles with the Phase I contract and are hoping to use the lessons learned as they develop the Phase 2 contract.

Progress on the east side of the 4FRI footprint has moved along faster than the west side of the footprint which forest managers attribute to the proximity of the Novo BioPower Plant and mills in the area.

“The industry is really located on the east side,” Kruger said. “One of the most significant and limiting factors in the industry’s ability to be sustainable is the haul distances from the forest to the mill.”

The cost of hauling biomass from the west side of the footprint, which includes Kaibab and Coconino National Forests, has been a significant problem for loggers.

“It’s a real issue because there is nowhere to take the material over here on the west side,” he said.

“This is where we really need help from our partners because we are in the wood supply business, we don’t have a commercial or marketing division that can help bring that industry in,” he said.

Despite the struggles the Phase 1 contractors have had with accomplishing the 300,000 acre thinning project, work continues in the forest and at the mill site in Williams.

FEC Logging recently acknowledged they acquired the assets of A1 Timber, out of Washington state and hired a number of their staff to help the company ramp up its in-house trucking and logging capacity.

The company said they have already invested over $70 million into the 4FRI project and have plans to invest significant additional capital in the project this year to expand its plant and staff.

The Forest Service is encouraged with the recent investment into FEC and Kruger said development of a high-capacity mill on the west side of the 4FRI footprint is important to the success of the project.

“It’s a good sign to see them ramping up operations and wanting to move forward,” Kruger said.

A recent Arizona Corporation Commission (ACC) decision that will require the state’s utilities to produce 90 megawatts of energy annually from forest biomass, is also encouraging to forest officials.

“If it creates a market, that’s a good thing,” Dick Fleishman, 4FRI operations coordinator said of the ACC decision. “That market opportunity can definitely expand with a corporation requirement.”

In May 2017, ACC Commissioner Boyd Dunn requested the opening of a docket to explore the role of forest bioenergy in Arizona as a means to use the woody biomass generated from thinning to create energy for the grid.

The Commission ordered APS to conduct a study and assess the use of forest bioenergy - taking into consideration forest thinning activities, costs, environmental benefits and adjustments to APS’s revenue requirement to assist the Commission in its assessment of the issue.

Last week, APS announced it will study the possibility of converting the Cholla Power Plant near Joseph City from coal to woody biomass.

This conversion could greatly impact logging operations on the west side of the 4FRI footprint, giving it closer proximity to a biomass plant.

Fleishman said any industry development that helps the Phase 1 and Phase 2 contractors will also help others involved with the 4FRI project.

In addition to the Phase 1 contractor, he said there are numerous other restoration contracts for the 4FRI project.

The Forest Service said 712,006 acres have been treated from 2010-2018 by others outside the Phase 1 contract using mechanical thinning, fire and other treatment methods. An additional 45,594 have been treated in FY 2019.

Kruger said despite the setbacks, stakeholders and those with the Forest Service are dedicated to the restoration of northern Arizona forests.

“What we saw in California last summer is a stark reminder of what’s at stake in western forests,” Kruger said. “I know our partners are rightly concerned about the pace of restoration, it’s a team effort. I think we are hopeful that GEP will continue to make progress and we’ll bring others in. I’m optimistic because I haven’t seen a single person who wants to see this fail.”