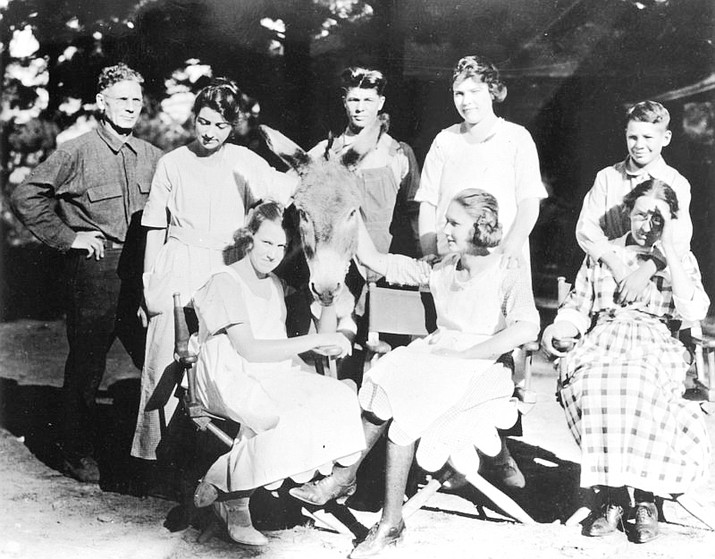 Workers celebrate the first bucket of concrete being poured at Glen Canyon Dam in 1960. It was completed three years later. (Photo/U.S. Bureau of Reclamation)

1963: The gates of Glen Canyon Dam closed and Lake Powell began to fill

Began in 1956, Glen Canyon was topped off Sept. 13, 1963, allowing the gates to close for the last time, facilitating the filling of Lake Powell. Construction on the power plant began immediately after the 710-foot high dam was completed. The first electricity was generated for the dam in 1966.

1965: On-location filming of “Brighty of the Grand Canyon” began

Hollywood descended on the Grand Canyon in 1965 to film a feature based on Brighty, a burro who lived and worked at Grand Canyon’s North Rim from about 1882 to 1922.

Brighty was popular with tourists but the National Park Service considered burros an invasive species — they weren’t native even to America, having arrived with the Spanish in the 16th century. NPS decided to eliminate the animals from the area and killed nearly 2,000 of them before a Book published in 1953 and Brighty’s namesake film helped bring awareness to the burros’ plight.

Today, a bronze statue of Brighty, commissioned and donated to the lodge on the North Rim, greets visitors, who often rub his muzzle for good luck.

Crews began construction on the transcanyon water pipeline, which carries water from Roaring Springs on the North Rim to more than 6 million visitors per year.

Flooding in 1966 wiped out much of the work being done near the Colorado River, pushing construction behind. It was completed in 1967.

Because of its age and materials used to construct it, the transcanyon water pipeline has far exceeded its useful life and is expected to be replaced in upcoming years.

1968: The last passenger train to the Grand Canyon left the Williams depot

The Grand Canyon Railway train line from Williams to the South Rim made the canyon accessible like never before — travel took only a few hours instead of two days by stagecoach.

By the 1930s, however, automobile traffic had far outpaced the train as the preferred method of travel, and the Grand Canyon Railway ceased operations in 1968. It was subsequently revived in 1989.