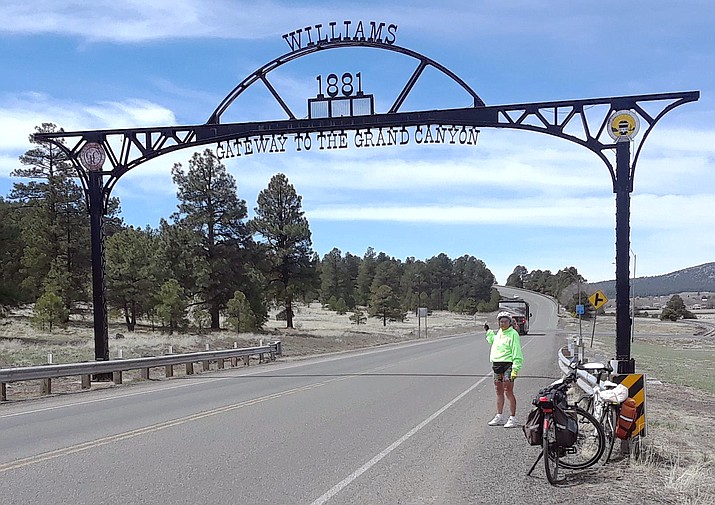 WILLIAMS, Ariz. — Carol Zemola Garsee, a 77-year-old grandmother from Chicago, arrived by bicycle in Williams, April 7. It was her 54th day on a bicycle journey across the United States.

She's the oldest woman in a group of 14 senior citizens riding from coast-to-coast. They're bicycling approximately 60 miles a day, beginning Feb. 12 in St. Augustine, Florida and ending April 18 in San Diego, California.

"It's been an adventure bicycling on Route 66," Garsee said. "I passed into Williams today under the 'Gateway To The Grand Canyon' arch near Rodeo Road."

"I like the the old-fashioned Route 66 themes in Williams restaurants and shops. It was like being in the 1950's, so cool,” Garsee added. "Tomorrow our group of cyclists will take a train to the Grand Canyon and stay there overnight.”

"As a city dweller, it's a treat to see places like Williams up close, on my bicycle, " she said.

Garsee hopes she’ll encourage more seniors, especially women, to get out and ride their bikes.

“Bicycling is my passion,” she said. “I love being in the outdoors and exercising. It’s a great way to stay healthy, have adventures and meet new people!”

“I’m confident I can go the distance because I’ve done it before,” Garsee added.

In 2006 she rode across the northern U.S. with about 20 bicyclists.

As a younger woman, Garsee ran marathons including ones in Chicago and Germany. Her best marathon time was about 3 hours and 36 minutes.

Garsee is married with two children and four grandchildren. Before retirement, she worked as an office assistant, cashier, stock-clerk, race organizer and race announcer. She has worked with Chicago Area Runners Association, Avon International Running, the Chicago marathon and many other running events.

Garsee is funding her trip with donations from a GoFundMe page, https://www.gofundme.com/senior-bikes-across-us and support from Boiron, a homeopathic products maker.

More information or to follow updates about Garsee’s journey is available at https://www.arnicare.com/ordinary-extraordinary/carol-garsee/