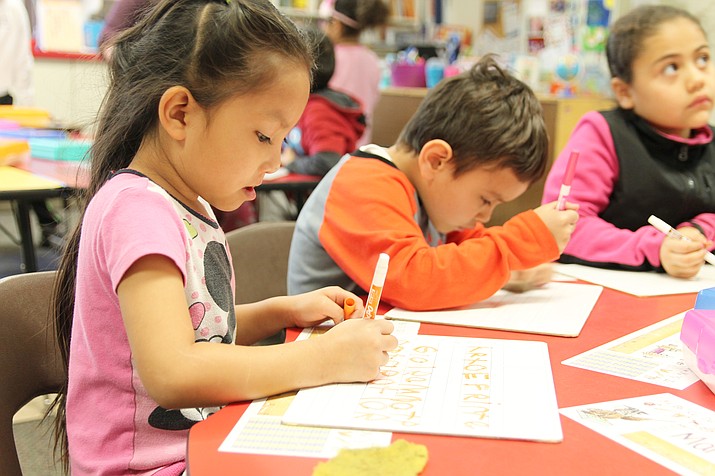 Grand Canyon students practice writing their letters and names during independent writing time. Kindergarten teacher Juliana Fontenot said she frequently divides her teaching objectives based on students' skills, including those who perform under and beyond grade level expectations. (Erin Ford/WGCCN)

GRAND CANYON, Ariz. — According to the National Education Association, getting a jumpstart on education in a quality preschool program can pay dividends later in life, including increased earning potential and higher academic achievement.

Providing a quality pre-kindergarten education to children from low-income families is the goal of Head Start, which began operating its program at Grand Canyon three years ago. Since then, however, enrollment in the program has been a challenge. The Head Start program requires at least 15 children from qualifying families enrolled in the program to fund it.

According to Grand Canyon principal Tom Roland, the district has just 11 students. That’s not enough for federal funding, and the school learned earlier this month that the Head Start program will be discontinued.

"Early childhood programs set the foundation that is going to impact the future for students’ academic, social and emotional success,” Fontenot said. “If they don’t have that, it creates a gap.”

Fontenot said children who have had a preschool foundation come in school ready — they know how to hold a pencil, count to 10 and know their letters, shapes and colors. But perhaps more important are the intangibles. The students are used to routine, Fontenot said, and they know basic social skills like conflict resolution, problem solving and how to self-regulate their own emotions and behavior.

“It gets them ready for the school environment, and when students come to me without that, I then have to work on all those basic preschool skills that they didn’t get,” she said. “That creates an achievement gap where I have students who are writing full sentences and using punctuation, then I have students who are working on letters and their names because they just aren’t at that level.”

Fontenot said students without an early childhood education also tend to have smaller vocabularies and lack skills such as collaborating on work and sharing toys or supplies with friends.

“I can’t teach them academics until those things are in place, so they miss out for a while,” she said. “They can’t focus on learning until their bodies and minds are able to be in the (school) environment.”

Fontenot said she commonly has to divide her classroom teaching methods to teach students who are performing at grade level while assisting those who may be behind and challenging a few who are performing well above kindergarten standards.

Because Grand Canyon School serves a wide variety of students from different backgrounds, Roland and Dean of Students Lori Rommel asked for the school’s governing board to allow them to pursue their own program for next school year. Superintendent Shonny Bria said the school had a source of funding they could use to administer the program, including hiring another teacher with the required early childhood endorsement.

Fontenot is currently the only teacher at the district who meets that requirement. 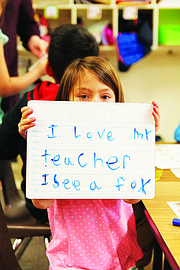 A kindergarten student shows off her work during independent writing time March 29. Students prepared by an early childhood program are more likely to know their letters and numbers, as well as exhibit more rounded social skills, according to Juliana Fontenot. (Erin Ford/WGCCN)

Their request was granted, and Roland said meetings are already taking place to assess what a program administered by the school district might look like. He envisions being able to help even more students, since the restrictions put in place by the Head Start program wouldn’t necessarily apply to the district.

Roland said one example was transportation. Head Start requires students to have a separate bus and bus route, but if the preschool program was administered by the district, students could take already-operating bus routes with an aide to help them if needed. The district could also accept any student regardless of family income, whereas Head Start adheres to certain income guidelines.

Another important factor in the school’s efforts to have a program in place includes children with disabilities who may otherwise be lost in the shuffle.

Many of those children are referred to her through Head Start or the Kaibab Learning Center, and Lehman said the convenience of operating the Head Start classroom next to her special education office in the school was a great convenience to parents because the children could simply walk next door when it was time to meet with speech, occupational or physical therapists, for example.

“That immediate access will be gone,” she said. “That’s what the parents are worried about right now. If there’s no (Head Start) program next year, their parents will have to bring them in. It’s very inconvenient for them if the mom works outside the home.”

It would also take an additional year to identify and start serving children with special needs without the prospect of identifying them through Head Start or any other program.

“We get kids in Head Start who were not identified because their needs may not have been as severe as others referred by Head Start,” Roland said. “The process never stops.”

Lehman said the district’s specialists use age-specific tools to identify students who may have developmental, communication or motor delays. She said when those issues are identified and evaluated through a preschool program, significant progress could be made to ensure a smoother transition to the mainstream kindergarten classroom.

“We are a full-inclusion district, which means the kids are in their gen-ed curriculum but are pulled out either for small-group instruction or specific services that aren’t appropriate to teach in front of other kids,” she said.

Lehman and Roland both emphasized the need to make sure students weren’t slipping through the cracks, whether they have special needs or not.

“It’s upsetting when we find a child in ninth, tenth, eleventh grade that we’ve missed all these years,” Roland said. “The earlier we find out a special needs issue, the earlier we can address it.”

Lehman said the district aims to identify all special needs children between kindergarten and third grade.

Roland said the district’s vision for a preschool program is in its earliest stages and includes meetings with other stakeholders in the community, including Kaibab Learning Center, which also offers an early childhood program. Kaibab Learning Center is a private preschool located nearby. Roland said the district wants to make sure both programs are successful in serving the community’s kids. A parent meeting will be scheduled at a later date.

Roland said the district hopes and plans to have an operational program by the beginning of the next school year.