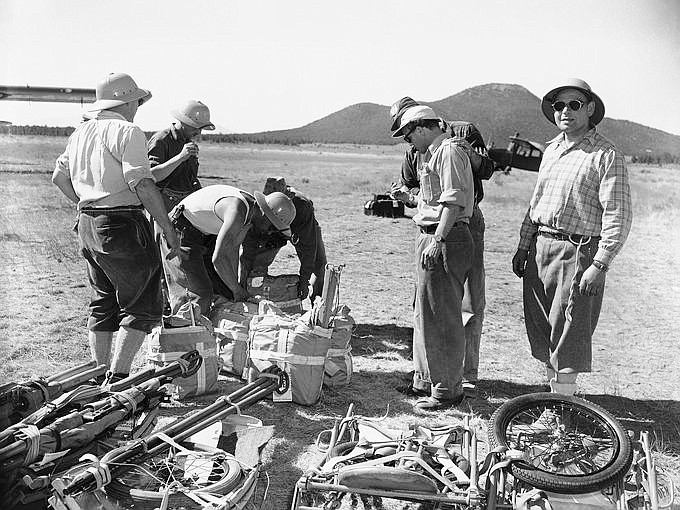 A team of Swiss mountain climbers prepares the gear in an attempt to retrieve remains and wreckage from a plane collision in a remote area of the canyon in 1956. (Photo/Associated Press)

While the first explorers of the Colorado River made their way down the rapids in precarious wooden dory boats, the need for sturdier means of water travel grew. By the 1950s, a ready supply of inflatable rafts, some military surplus, become the de facto mode of travel down the river.

Prospectors discover uranium in Orphan Mine below the South Rim

Located below the rim between Maricopa and Powell Point, Orphan Mine was origianlly a copper mine, opened by Daniel Hogan in 1906. In 1951, prospectors discovered uranium.

After public opinion turned against uranium production in the 1960s and costs soared far above profitability, Orphan Mine closed in 1969 having produced nearly half a million tons of uranium ore. 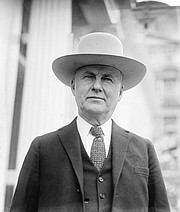 Ralph Cameron came to Grand Canyon in 1883 and became instrumental in efforts to develop the areas surrounding what is now the national park, including setting up logging camps and mining claims. After opening the Last Chance Mine in 1890, Cameron constructed what would become known as Bright Angel Trail as well as a log cabin hotel at the South Rim.

Cameron was a politician for both Arizona as a territory and as a state. Once he became a member of the Senate, however, he fell out of favor with many Northern Arizona voters, who considered many of his political stances designed to boost his own business interests.

Cameron suffered a heart attack Feb. 7, 1953 on a business trip to Washington D.C.

On June 30, 1956, two airplanes carrying a total of 128 passengers and crew collided in mid-air over the Grand Canyon.

A series of decisions both conventional and non-conventional — including climbing in altitude to avoid storm clouds — led to the collision. The post crash analysis determined that both pilots had likely been trying to avoid the same towering cloud on opposite sides, and the angle at which they collided suggested that both had tried to avoid the encounter moments before.

The collision was a result of loosely regulated flight rules and a lack of oversight for controlled airspace particularly in large swaths of the west. Remains of the victims are interred at both the Grand Canyon Pioneer Cemetery and Citizens Cemetery in Flagstaff.

A series of near misses and collisions caused an alarmed public to demand action, and the Federal Aviation Act, paving a way for the modern FAA, was passed in 1958.