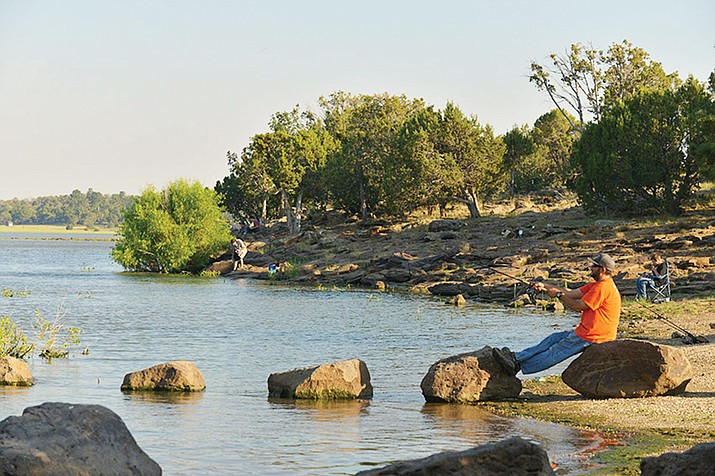 WILLIAMS, Ariz. — As the weather warms, anglers and visitors may be itching to get out to some of northern Arizona’s best fishing spots. The Arizona Game and Fish Department have stocked lakes and are reporting fair to good conditions for spots such as Lee’s Ferry, Lake Powell and Lake Mead.

Although winter held on longer than usual this year, anglers at Lee’s Ferry have reported that trout have begun slowly moving from the depths to more shallow waters. Deep water fishing is still recommended through April — shallower waters are expected to start teeming with trout through May and June. Anglers report the fish are in good, healthy condition and the average size of trout are larger than previous seasons.

AZGFD stocked rainbow trout on the lower end of Lee’s Ferry, the first time since 1996.

Warmer temperatures are causing bass and stripers in Lake Powell to move toward more shallow waters, making good fishing for the early spawns. Anglers reported that the shallowest fish caught was in two feet of water and the deepest was at 14 feet.

The time is prime for largemouth bass right now, with seasoned anglers recommending searching for shallow, murky water where bass are grouped in the warmer pools.

Use caution if boating, as several small islands have emerged as the lake level has declined.

As of the beginning of March, the lake level was at 1,088 feet. This is around the same elevation that it was last year at this time. Fish will begin moving up shallow in April. Largemouth bass and carp should be shallow and in the heat of spawning during this period.  Stripers will be coming up as well.

Try the mouths of coves to start and work your way back in.  Directly across the basin from South Cove, catfish and stripers will bite regularly from now through the summer. The river inflows can be a hot spot for stripers. Drifting anchovies in this area is usually most productive.  All the big arms and tributaries to the lake will have spawning fish first.  Way up in the Overton Arm, Las Vegas Bay and Grand Wash are usually good bets in the spring.  Stripers will key into inflows. Gusty winds are common during spring, so check the weather forecast before going on the Lake.

Flows fluctuate quickly in the stretch of the river.  Many anglers prefer not to navigate the river when less than one unit is being released from Davis Dam.

Trout are stocked weekly by the USFWS Willow Beach National Fish Hatchery from October through March.  Additional trout will be stocked in April and May with funding from Bullhead Pest Abatement.  With an abundance of blackfly and caddisfly larvae available for the trout to feed off of, not only can you catch the recently stocked fish, but older holdover trout should be growing quickly here. Trout are stocked at Davis Camp and Community Park during the spring.  Many anglers prefer to fish for the holdover trout away from the stocking locations.

Striped bass will also be moving up from Havasu.  Anglers will have a great opportunity to catch stripers throwing big baits.