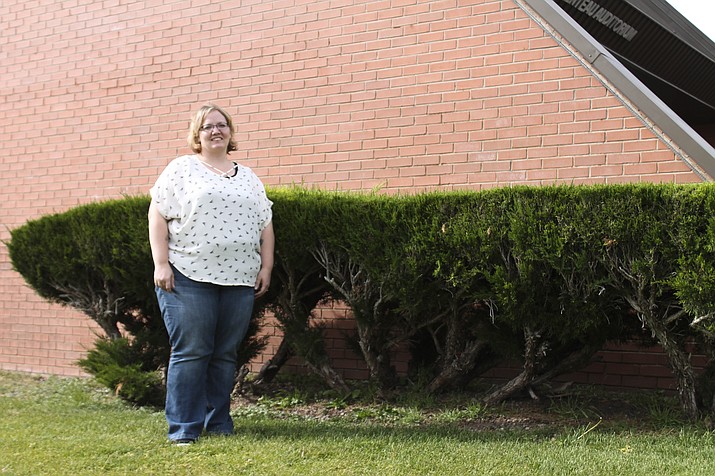 WILLIAMS, Ariz. — Imagine a creative maker space where you can take tiny minds and set them loose and have them explore and create things around problem based learning.

This vision is becoming reality after Hadder was named one of 100 winners selected as a 2018 Voya Unsung Hero.

As a recipient of the grant Hadder received $2,000 to be used in revamping the math program at the middle school.

Selected from a group of more than 1,200 applicants, Hadder will use this award to help fund and bring her program to life. In addition, she will now compete with other finalists for one of the top three prizes — an additional $5,000, $10,000 or $25,000 from Voya Financial.

Hadder said having her application selected and receiving the grant is humbling.

“Not just Voya, but the community as a whole has been supporting my dreams since I was 14. I would run around and sell popcorn and cotton candy as a band student at Williams High School. I feel humbled,” she said. “Teachers in general are just a community of amazing people. We’re very creative. We’re very intelligent and to be recognized as that I feel like I’m really just honoring and representing Williams as a whole.”

Hadder had never written a grant. She first researched and found U.S. Grants online, signed up for a $40 fee and found the Voya Financial grant. She then Googled grant writing and turned in her grant two hours later.

“A lot of the things that we’re trying to incorporate are real life applications with math content,” she said.

Earlier this week Hadder said her class focused on linear equations and conducted a forensic lab.

“We were comparing the length of a femur bone to an individual’s height and we were graphing it so that we could see, based on these remains, how tall the deceased individual may have been,” she said. “We kind of tied it into a social studies unit. They’ve been studying World War I so we talked about KIA and MIA and some of the challenges it was to get bodies relinquished back to the United States. We did a lab and were able to mock the bodies. It was a real life application to forensics being applied to mathematical equations.”

Hadder tries as often as possible to bring in real life applications. The money from the grant will help to purchase a 3D printer. She said having a 3D printer would allow her to more than just talk about a bone. She could create a bone and have it printed in the classroom.

She said they are also starting a robotics program for K-12th grade that will compliment the current high schools robotic program.

Additionally, she said that the printer could be used in geometry to help students interested in fashion to construct clothing after finding the surface area of the cloth.

“The opportunity is huge and we have a lot of different directions that we could go but the end result is getting some more hands on experience and making it more applicable,” she said.

Someday Hadder envisions a space that could be utilized by teachers and classrooms — a hands-on environment with different manipulatives for students to use.

Through the Voya Unsung Heroes program, Voya Financial awards grants to K-12 educators nationwide to honor their innovative teaching methods, creative educational projects and ability to positively influence their students. For more than 20 years, the program has awarded over $5 million in grants to more than 2,000 educators across the United States.